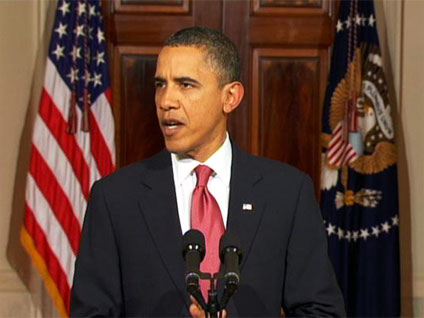 President Obama said late Tuesday afternoon that an "orderly transition" in Egypt "must begin now" in the wake of widespread protests that have thrown the country into turmoil.

The comments came on the same day Egyptian President Hosni Mubarak announced that he would not seek re-election in September - a stance that fell short of the demands of protesters, who want their longtime leader to step down immediately.

Mr. Obama said he spoke to the 82-year-old Mubarak following the Egyptian leader's announcement, a conversation that the White House said lasted approximately 30 minutes. A special U.S. envoy had reportedly informed Mubarak earlier that the Obama administration saw Mubarak's presidency -- which has lasted nearly three decades -- as essentially over.

"After his speech tonight, I spoke directly to President Mubarak," Mr. Obama said. "He recognizes that the status quo is not sustainable. And that a change must take place. Indeed, all of us who are privileged to serve in positions of political power do so at the will of our people. Through thousands of years, Egypt has known many moments of transformation, the voices of the Egyptian people tell us that this is one of those moments. This is one of those times."

He continued: "Now, it is not the role of any other country to determine Egypt's leaders. Only the Egyptian people can do that. What is clear, and what I indicated tonight to President Mubarak, is my belief that an orderly transition must be meaningful. It must be peaceful, and it must begin now."

The president said that the transition process must lead to free and fair elections and include opposition parties as well as "a broad spectrum of Egyptian voices." He said it should "result in a government that's not only grounded in democratic principles but is also responsive to the aspirations of the Egyptian people."

Mr. Obama also said over recent days the American people have "borne witness to the beginning of a new chapter in the history of a great country." He commended the Egyptian military for not using violence against protesters, stating, "we've seen tanks covered with banners, and soldiers and protesters embracing in the streets, and going forward I urge the military to continue its efforts to help ensure that this time of change is peaceful."

He added that the United States will always "stand for universal values," including freedom of assembly, freedom of speech and the freedom to information.

Mr. Obama concluded his remarks by stating that Americans "stand ready to provide assistance to the Egyptian people."

"Over the last few days, the passion and the dignity that has been demonstrated by the people of Egypt has been an inspiration to people around the world, including here in the United States," he said. "And to all those who believe in the inevitably of human freedom. To the people of Egypt, particularly the young people of Egypt, I want to be clear, we hear your voices. I have an unyielding belief that you will determine your own destiny. And seize the promise of a better future for your children and your grandchildren."

He went on: "And I say that as someone who is committed to a partnership between the United States and Egypt. There will be difficult some difficult days ahead. Many questions about Egypt's future remain unanswered. But I am confident that the people of Egypt will find those answers. That truth can be seen in the sense of community in the streets. It can be seen in the mothers and fathers embracing soldiers. And it can be seen in the Egyptians who linked arms to protect the national museum. A new generation protecting the treasures of antiquity. A human chain connecting a great and ancient civilization to the promise of a new day."