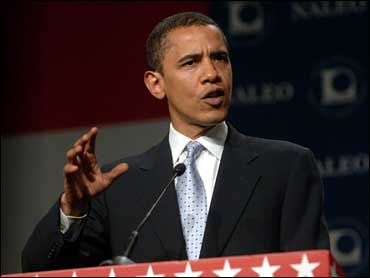 Democrat Barack Obama on Monday sharpened his critique of lead rival Hillary Rodham Clinton, warning against a return to "divisive, special interest politics" that had demoralized the country even before President Bush took office.

"As bad as this administration has been, it's going to take more than just a change in parties to truly turn this country around," Obama told supporters at a Labor Day rally.

"George Bush and Dick Cheney may have turned divisive, special interest politics into an art form, but it was there before they got to Washington. If you and I don't stand up to challenge it, it will be there long after we leave."

It was the latest volley in the "change versus experience" debate that has dominated the dialogue between Clinton and her top rivals in recent weeks. On Sunday, Clinton unveiled a new campaign speech where she argued that only a president experienced in the ways of Washington could bring about real political transformation.

Without mentioning Clinton by name, Obama struck back hard at that argument.

Obama, who has spent much of the campaign answering questions of whether he is experienced enough to be president, ticked through his years as a community organizer and consensus builder in the Illinois legislature and now in the Senate. But he also sought to frame his hope-driven message as an antidote to the cynicism of political insiders.

With Clinton still riding high in most polls as the fall campaign was set to begin in earnest, both Obama and John Edwards have stepped up their claim that Clinton is too cautious and too conventional to bring real change to Washington.

"Hope and change are not just the rhetoric of a campaign for me," he said, adding that for others, politics seemed to be a game.

He also vowed to tell the truth always as president.

"You shouldn't expect anything less from your president," he said to loud cheers.

Obama had a full day of campaign appearances in New Hampshire, where polls show him trailing Clinton by a wide margin.

With his wife, Michelle, and daughters Malia and Sasha, Obama participated in a Labor Day parade in Milford. He and Republican hopeful Mitt Romney exchanged greetings at the parade staging area before meeting voters along the two-mile parade route.

The Obama family was also scheduled to attend an ice cream social and a community dinner.