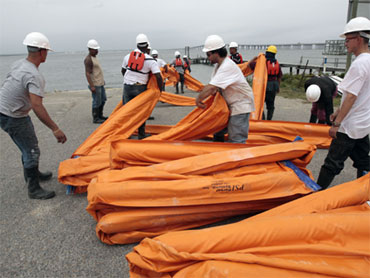 The worst U.S. oil spill in decades spread into precious shoreline habitat along the Gulf Coast as documents emerged showing British Petroleum downplayed the possibility of a catastrophic accident at the offshore rig that exploded.

Already, at least 1.8 million gallons of oil have leaked from the wreckage of BP's Deepwater Horizon oil rig since the rig exploded more than a week ago, reports CBS News correspondent Michelle Miller.

The underwater spill remained unstopped and impossible to measure, raising fears that it could be pouring more oil into the Gulf than estimated.

The Wall Street Journal reported Friday ($) that industry experts estimate that as much as 25,000 barrels of oil per day could be emptying into the Gulf - five times the current estimate.

President Barack Obama made plans to visit the Gulf Coast on Sunday for a firsthand update on the situation.

A senior administration official says details of the trip are still being worked out, and Mr. Obama will likely travel with a "small footprint" - meaning a very small entourage. The official spoke Saturday on condition of anonymity because the trip has not been officially announced.

President Obama has vowed his administration will do all that it can to battle the spill, which came from a BP exploratory rig. It began washing ashore Thursday.

High winds and choppy seas are hampering efforts to stem the tide of oil now washing up on parts of Louisiana's Gulf coast. The slick could reach Alabama, Mississippi and Florida by Monday.

Alabama Governor Bob Riley declared a state of emergency Friday, saying the oil leak poses a serious threat to the state's economy and environment. Mississippi Governor Haley Barbour did so as well.

Several miles out, the normally blue-green gulf waters were dotted with sticky, brown beads the consistency of tar. High seas were forecast through Sunday and could push oil deep into the inlets, ponds, creeks and lakes that line the boot of southeastern Louisiana.

The seas were too rough and the winds too strong to burn off the oil, suck it up effectively with skimmer vessels, or hold it in check with the miles of orange and yellow inflatable booms strung along the coast.

High winds and waves up to 7 feet are washing an oil sheen onto the shore at southeast Louisiana. Some floating barriers broke loose in the choppy water, and waves sent oily water lapping over them.

"It's always a huge factor - Mother Nature gets a vote in these responses," Admiral Allen said. "Since the start of this oil release, the winds shifted around approximately 270 degrees around the compass, and it makes it very difficult for spill trajectory. But if it really starts kicking up, boom becomes ineffective."

One expert said Friday that the volume of oil leaking from the well nearly 5,000 feet below the surface could actually be even higher, and that even more may escape if the drilling equipment continues to erode.

Ian R. MacDonald, an oceanography professor at Florida State University, said his examination of Coast Guard charts and satellite images indicated that up to 9 million gallons had already spilled by April 28.

Coast Guard Admiral Mary Landry brushed off such fears, saying "I would caution you not to get fixated on an estimate of how much is out there."

"This is highly imprecise, highly imprecise," agreed Doug Suttles, BP's chief operating officer for exploration and production. "We continue to respond to a much more significant case so that we're prepared for that in the eventuality that the rate is higher."

It could cost billions of dollars to clean up the oil spill, turning into one of the largest and most expensive oil cleanup operations in U.S. history - and blame is becoming abundant.

"It is clear that after several unsuccessful attempts to secure the source of the leak it's time for BP to supplement their current mobilization," said Homeland Security Secretary Janet Napolitano.

In the meantime, the government is taking steps of its own, launching 2 C-130 Hercules cargo planes to spray the spill with chemicals that disperse oil, and mobilizing 6,000 National Guard troops to help with the cleanup.

Despite these efforts, anxieties run high.

Several hundred people lined up for hazardous material training on Friday, many of them part of the $2 billion fishing industry.

A third of America's seafood is harvested by men like Mike Berthelot, a 34-year shrimping veteran whose marina has come to a standstill.

And another blow to fishermen: fish and wildlife officials have closed all fishing east of the Mississippi.

And apparently BP had no game plan for a spill like this, saying in that a disaster such as this was "unlikely."

Now the leak is creating a potential disaster for wildlife in the area.

"Well, I'm not sure that it's 'turned into' a disaster; I think it was a disaster unfolding from the start," said Admiral Allen.

He said that from the beginning, when the Coast Guard became engaged in a search and rescue operation after the explosion, an oil discharge was anticipated.

However, "The issue about oil on the surface really didn't come to light until the unit actually sunk several days later, and as we've been able to put remote operating vehicles down and find out where the oil's coming from we get a clearer picture. So I don't think anybody's been surprised - I think the thing is revealing itself as we go along and we have to adapt."

"We always assumed the minute we knew there was oil coming to the surface, that we needed to be prepared for a worst-case discharge, and that's much larger than what's coming out of the riser pipes now."