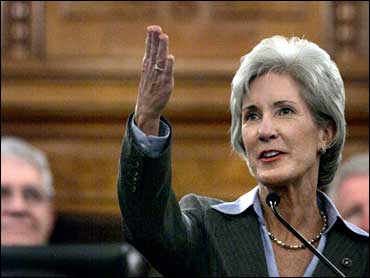 The source, who was not authorized to speak on the record, said Obama will formally announce the nomination on Monday.

A Democratic source in Kansas confirmed that Obama has spoken to Sebelius and said an announcement was expected this week. The source was close to the governor but not authorized to make the announcement and spoke on condition of anonymity.

Sebelius, 60, was an early Obama supporter and a finalist for Obama's ticket before he picked Joe Biden for vice president. During the general election campaign, she spent 24 days stumping for Obama in 16 states, including key battlegrounds such as Colorado, Florida, Indiana, North Carolina Ohio and Pennsylvania.

Her name had been floated for several Cabinet posts. She said in December that she had removed herself from consideration from a Cabinet job, citing Kansas' budget problems that needed her attention.

Sebelius drew praise for the consumer watchdog role she played as Kansas insurance commissioner for eight years before she became governor.

She is in the middle of her second term as governor and is legally barred from seeking a third term next year. Many Democrats had hoped Sebelius would finish her term and run for the U.S. Senate seat that Republican Sam Brownback is giving up in 2010.

Kansas has not elected a Democrat to the Senate since 1932, and Sebelius was seen as the best chance for breaking that string. She comes from a strong political family. Her father, John Gilligan, was the governor of Ohio in 1971-75, making them the only father-daughter governors in U.S. history.

Abortion foes strongly oppose Sebelius because she once had a reception attended by a late-term abortion provider who now faces criminal charges. Democrats say there was never any doubt that Obama would appoint an HHS secretary who supports abortion rights.

Sebelius will be subject to confirmation by the Democratic-controlled Senate.

During the primary and general election campaigns Sebelius worked tirelessly for Obama. Some Democrats in Kansas believe her endorsement of Obama over Hillary Rodham Clinton in January 2008 helped boost him to an overwhelming victory in the state's Democratic caucuses.

Some Democrats have said she has built a solid and even close relationship with Obama, gaining his trust.

National party circles have buzzed about her since she won her first term as governor in GOP-leaning Kansas in 2002. Party leaders have portrayed her as someone who has been able to attract support from moderate Republicans and independent voters.

She served a year as chairwoman of the Democratic Governors Association - a group Bill Clinton once led - and gave the party's response to President Bush's last State of the Union address.

Sebelius came to Kansas to work in the Department of Corrections in 1975, and three years later, she became the executive director of the Kansas trial lawyers' association. She ran for a seat in the Kansas House in 1986 and represented a left-of-center Topeka, Kan., district for eight years.

Sebelius won the first of two terms as insurance commissioner in 1994. Her image as a no-nonsense administrator and consumer advocate helped her in her first race for governor.

But she also has proven to be a prodigious fundraiser, collecting about $10 million in cash contributions for her two gubernatorial campaigns.

The Kansas Democratic Party has flourished during her governorship, raising $1.9 million over the past two years. Also, her political action committee, the Bluestem Fund, raised more than $668,000 during the same period.

Nationally, Democrats routinely describe Sebelius as a success at finding bipartisan solutions in a GOP-leaning state. She's long said addressing rising health care costs and making sure more people have coverage are top priorities for her as governor.

But she's often found her ambitions frustrated by Republican legislators who are wary of expanding government and prefer measures that help people find private insurance.

Late in 2004, she proposed raising tobacco taxes by $50 million a year to finance health care initiatives, and the Legislature largely ignored the idea in 2005.

She opened her second term in January 2007 by calling on legislators to draft a plan to bring universal health coverage to Kansas. But she provided no specifics, and, again, legislators largely ignored her call, favoring instead incremental reforms.

Last year, she backed a 21-point plan from the Kansas Health Policy Authority to phase in $330 million in new spending on health care initiatives over five years, but the package required tobacco tax increases and gained little support among legislators. Later, in assessing the 2008 legislative session, Sebelius told reporters, "The single biggest disappointment in terms of a policy area is health care."

In 2007, the Legislature created a new program to provide state subsidies to poor families so they could buy insurance. The aid was supposed to start this year, but legislators canceled the program in 2008 because they were spooked by its potential cost.

Yet legislators in both parties agree the state has made some progress on health care since Sebelius became governor in January 2003.

The state has expanded cancer screenings, allowed more Kansans can keep their health insurance up to 18 months after leaving their jobs and granted income tax deductions that helped some Kansans lower their insurance costs.