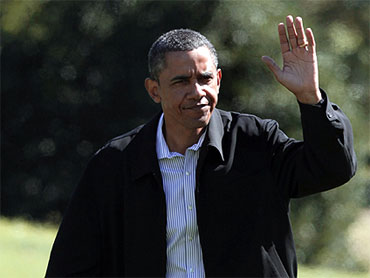 Vowing to find new ways to stimulate the sputtering economy, President Obama will call for long-term investments in the nation's roads, railways and airports that would cost at least $50 billion, administration officials said.

The infrastructure investments are one part of a package of targeted proposals the White House is expected to announce in hopes of jump-starting the economy ahead of the November election. Obama will outline the infrastructure proposal Monday at a Labor Day event in Milwaukee.

While the proposal calls for investments over six years, officials said spending would be front-loaded with an initial $50 billion to help create jobs in the near future. The officials spoke on the condition of anonymity to discuss the proposals ahead of the president's announcement.

The goals of the infrastructure plan include: rebuilding 150,000 miles of roads; constructing and maintaining 4,000 miles of railways, enough to go coast-to-coast; and rehabilitating or reconstructing 150 miles of airport runways, while also installing a new air navigation system designed to reduce travel times and delays.

Officials wouldn't say what the total cost of the infrastructure investments would be, but did say the initial $50 billion represents a significant percentage. Officials said the White House would consider closing a number of special tax breaks for oil and gas companies to pay for the proposal.

Obama made infrastructure investments a central part of the $814 billion stimulus Congress passed last year, but with that spending winding down, the economy's growth has slowed. Officials said this infrastructure package differs from the stimulus because it's aimed at long-term growth, while still focusing on creating jobs in the short-term.

With the unemployment rate ticking up to 9.6 percent, and polls showing the midterm elections could be dismal for Democrats, the president has promised to unveil a series of new measures on the economy.

Plante reports, however, that Mr. Obama's expected jobs push is unlikely to help the president and fellow Democrats all that much at the polls in November, according to some analysts.

Solis told CBS the Department of Labor was investing heavily in training and educating Americans for the jobs of the future, which many analysts predict will come largely in high-skilled and low skilled fields, leaving doubts over the future of America's thousands of unemployed mid-level workers.

New Jobs of Future May Leave Many Behind

Solis insisted that the Obama administration was also working to ensure the creation of new jobs in the building and manufacturing sectors.

In addition to Monday's announcement in Milwaukee, Obama will travel to Cleveland Wednesday to pitch a $100 billion proposal to increase and make permanent research and development tax credits for businesses, a White House official said.

While the idea is popular in Congress, coming up with offsetting tax increases or spending cuts has been a stumbling block. Similar to his proposal to pay for the infrastructure investments, Obama will ask lawmakers to close tax breaks for oil and gas companies and multinational corporations to pay for the plan.

Other stimulus measures the administration is considering include extending a law passed in March that exempts companies that hire unemployed workers from paying Social Security taxes on those workers through December. Sen. Chuck Schumer, D-N.Y., has proposed extending the exemption an additional six months.

Obama is also continuing to prod the Senate to pass the small business bill that calls for about $12 billion in tax breaks and a $30 billion fund to help unfreeze lending. Republicans have likened the bill to the unpopular bailout of the financial industry. And the president wants to make permanent the portion of George W. Bush's tax cuts affecting the middle class.

Wary of the public's concern over rising deficits, the administration insists a second stimulus plan, similar to last year's $814 billion bill, is not in the works.