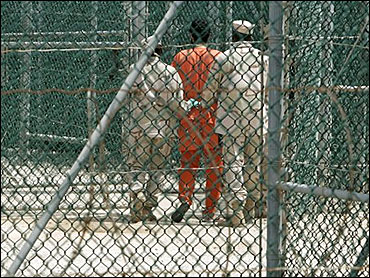 President Barack Obama will issue an executive order Thursday to close the Guantanamo Bay detention center within a year, CBS News has learned. The administration intends to halt military trials of terror suspects held there, according to a draft order obtained by the Associated Press.

The executive order was one of three expected imminently on how to interrogate and prosecute al Qaeda, Taliban or other foreign fighters believed to threaten the United States.

An estimated 245 men are being held at the U.S. naval base in Cuba, and another 600 at Bagram Air Base in Afghanistan. Most have been detained for years without being charged with a crime. The administration already has received permission to suspend the trials at Guantanamo for 120 days pending a review of the military tribunals.

Wednesday's draft order dealt only with the Guantanamo prison. It fulfills President Obama's campaign promise to shut down the facility, which critics around the world say violates domestic and international detainee rights.

"In view of the significant concerns raised by these detentions, both within the United States and internationally, prompt and appropriate disposition of the individuals currently detained at Guantanamo and closure of the facility would further the national security and foreign policy interests of the United States and the interests of justice," the draft order said.

It's not clear when Obama will sign the order, which was dated "January xx, 2009." A copy of the draft was obtained by The Associated Press.

A senior Obama administration official said Wednesday that between 60 to 120 Guantanamo prisoners may be considered low-threat detainees and transferred to other countries, either for rehabilitation or release. Only Portugal so far has agreed to take some of those detainees, the official said, although diplomatic discussions are ongoing.

The official spoke on condition of anonymity because the executive orders have not been issued yet. A State Department spokesman did not immediately know which nations had been asked to accept some prisoners.

Other detainees could be imprisoned in their home nations. And the rest likely will be transferred to prisons in the United States - a plan that many members of Congress oppose.

Public interest and human rights groups that long have wanted the facility shuttered were quick to urge Mr. Obama to be more aggressive than the draft order's proposals.

The Center for Constitutional Rights, which provides many of the Guantanamo detainees with legal representation, said the draft doesn't give specific steps for closing the facility.

"It only took days to put these men in Guantanamo. It shouldn't take a year to get them out," said Vincent Warren, the center's executive director.

The draft requires a review of each Guantanamo case to decide whether the detainees should be returned to their home countries, released, transferred elsewhere or sent to another U.S. prison.

House Republican leader John Boehner said he's open to options, "but most local communities around America don't want dangerous terrorists imported into their neighborhoods, and I can't blame them."

"The key question is where do you put these terrorists?" Boehner said Wednesday. "Do you bring them inside our borders? Do you release them back into the battlefield? If there is a better solution we're open to hearing it."

Senate Judiciary Committee Chairman Patrick Leahy, D-Vt., has long contended the U.S. can handle relocating the detainees "just as it has handled the worst criminals and other terrorists before," spokesman David Carle said.

It's also unclear how the detainees would be prosecuted.

At the request of the White House, Defense Secretary Robert Gates on Tuesday night ordered military trials at Guantanamo to be frozen for 120 days during an Obama administration review. Military judges on Wednesday agreed to halt the cases of five men charged in the Sept. 11, 2001, attacks, along with the case of a Canadian accused of killing an American soldier in Afghanistan.

"The president has clearly made his intentions well known," Pentagon spokesman Bryan Whitman said Wednesday. "And he has taken the first steps with respect to his direction to order a pause to military commission proceedings."

The senior Obama administration official said the 120-day suspension could be extended indefinitely if the review concludes that current military trial system, devised by advisers to former President George W. Bush, should end.

If that happens, the cases likely will be heard by federal courts under long-standing military or civilian criminal law.

It's also possible that the Obama administration could call for a new national security court system - a hybrid of the two - although the official described that as "a last resort."

John D. Altenburg Jr., a retired Army general who oversaw the military commissions until November 2006, says Guantanamo should stay open and the tribunals should continue.

Trying detainees in federal courts is problematic, he says, because the evidence was collected "on a battlefield" and may be inadmissible outside the commissions, although "it doesn't mean the evidence is tainted."

Two more executive orders also are expected in coming days, according to two Obama officials. Those will deal with what methods will be allowed to interrogate terror suspects.

One official said the first interrogation order will require all U.S. personnel to follow the U.S. Army Field Manual while questioning detainees. The manual explicitly prohibits threats, coercion, physical abuse and waterboarding, a technique that creates the sensation of drowning and has been termed a form of torture by critics.

At the same time, the second order will demand a study of interrogation methods that could be added to the Army manual. It was unknown Wednesday what those methods could include, but officials have said they would be more aggressive than what is currently allowed.