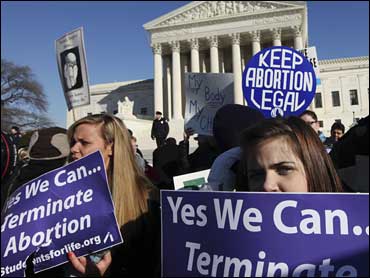 (AP)
President Obama plans to sign an executive order today reversing a Bush-era policy banning federal funding for international groups that promote or perform abortions, according to the Associated Press.

UPDATE, 4:40 pm: The president has signed the executive order.

"Women's health has been severely impacted by the cutoff of assistance," said Tod Preston of Population Action International. "President Obama's actions will help reduce the number of unintended pregnancies, abortions and women dying from high-risk pregnancies because they don't have access to family planning."

The move comes just one day after thousands marched in an anti-abortion rights demonstration on the National Mall in Washington for the anniversary of the Roe V. Wade decision. It will likely be met with anger by those marchers and their supporters, who differ with the president over abortion.

Yesterday, Mr. Obama put out a statement reaffirming his support for abortion rights. He also called for steps to be taken to reduce the number of abortions.

In related news, an anti-abortion rights group has enlisted the new president in an ad advocating their position, despite the fact that Mr. Obama doesn't agree with it.