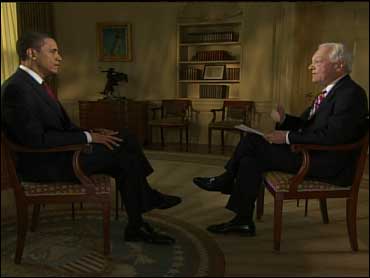 Mr. Obama made the comment during an interview for "Face the Nation." He said that during the meeting he asked the CEOs of 15 financial institution to understand the argument he has to make to Americans about helping institutions such as theirs.

"For the average single mom who is just barely struggling to pay her mortgage or medical bills for her kid, who's paying her taxes, who's playing by the rules and then finds out that a taxpayer-assisted firm is paying out multi-million dollar bonuses," he said. "That's just not acceptable."

"Show some restraint," the president said he told bankers. "Show that you get that this is a crisis and everybody has to make sacrifices."

"I don't want is that larger project [of helping the U.S. economy] to be threatened by short-term gratification," he said.

The bankers responded positively, Mr. Obama said. He noted that the "proof of the pudding's in the eating. So I expect to see that restraint operate."

"Now, the flip side is I've gotta explain to the American people we're not gonna get this recovery if we don't see a recovery of the financial sector," he continued. "And there's no separation between Main Street and Wall Street."

President Obama also said "there are a lot of bankers that are doing good work in the community, that are acting responsibly, that haven't taken huge risks."

Schieffer asked if the president feels he has held strong to his campaign promise of middle class tax cuts considering some Democrats want the cuts to be discontinued after 2010.

"Absolutely not," the president said, noting that the tax cuts will not run out for at least two years.

He said that even if Congress does not allow for the tax cuts to be funded in the 2010 budget they will be funded from some other resource.

"In my original budget we had a way of paying for it," he said. "And some of the proposals that we have made, members of Congress have said, 'Well, we're not quite comfortable with that.'"

He said he has told Congress, "you don't wanna pay for it in those ways, let's find another way to pay for it. I think it's still the right thing to do. And I'm gonna be pushing as hard as I can to get it done in this budget. If it's not done in this budget then I'm gonna keep on pushing for it next year and the year afterwards."