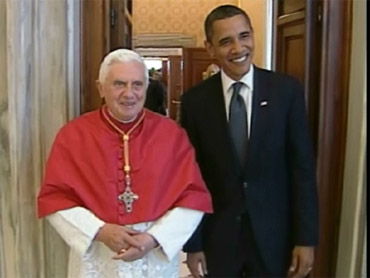 President Obama told Pope Benedict XVI at a Vatican meeting that he would work to limit how many abortions take place each year in the United States, according to a Vatican spokesman.

"The pontiff told me that President Obama affirmed his personal commitment to try to reduce the number of abortions in the United States," spokesman Federico Lombardi said, according to Agence France-Presse.

The president met with the pope for 25 minutes on Friday in the Papal Library. As the pair posed for pictures at the outset of the meeting, the president said to the pontiff, "I'm sure you're used to getting your picture taken. I'm still getting used to it."

Cameras and reporters were only allowed to record the beginning and end of the meeting. The president could be heard saying "thank you, God bless you" to Benedict as they parted. He also said he looks forward to "a very strong relationship between our two countries."

According to the White House, the two men discussed the encyclical (Papal letter) released by the pope earlier this week, and Benedict gave the president a signed copy of the encyclical. They also discussed the situation in the Middle East, Cuba and Honduras. 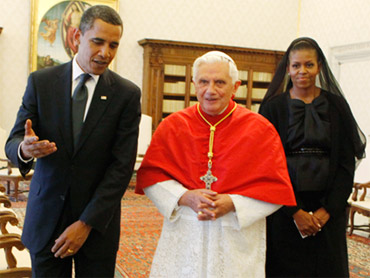 McDonough said the president presented the pope with a letter from Senator Ted Kennedy and asked him to pray for Kennedy, who has been battling brain cancer. The content of the letter was not disclosed. Kennedy's brother John was the first Catholic president on the United States.

On taking off from Rome today, Mr. Obama called Kennedy to tell him about the meeting - and assure him the letter was delivered, reports CBS News White House correspondent Mark Knoller.

According to McDonough, Mr. Obama "was very impressed and touched by the office of the Holy Father but also by the breadth of issues that they discussed."

This was the first meeting between President Obama and Pope Benedict. Mr. Obama sought common ground on abortion and stem cell research during the meeting, McDonough said, despite the differences between Benedict and the pro-choice president.

At the staunchly Catholic University of Notre Dame earlier this year, the president stressed his desire to reduce the number of abortions in America.

"Let's make adoption more available," he said. "Let's provide care and support for women who do carry their children to term. Let's honor the conscience of those who disagree with abortion, and draft a sensible conscience clause, and make sure that all of our health care policies are grounded not only in sound science, but also in clear ethics, as well as respect for the equality of women." 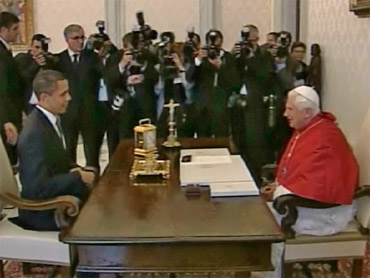 (CBS)
Mr. Obama, who is a Protestant, won the support of most Catholics in the presidential election. But he has been criticized by conservative Catholics, who were unhappy that he was invited to speak at Notre Dame.

The Vatican released a statement following the meeting referencing the two men's differences on abortion.

"In the course of their cordial exchanges the conversation turned first of all to questions which are in the interests of all and which constitute a great challenge for the future of every nation and for the true progress of peoples, such as the defense and promotion of life and the right to abide by one's conscience," the statement read.

There are issues on which the two men agree, including minimizing the potential impact of the global recession on the poor and reducing the number of nuclear weapons worldwide.

The president and the pope shook hands when they met, and Mr. Obama told the pontiff that the audience was "a great honor." They then sat down across from each other at Benedict's desk.

The pope asked the president about the Group of Eight summit in L'Aquila, Italy, where the president had spent three days before the meeting. Mr. Obama said the summit had been "very productive."

The two were joined by first lady Michelle Obama toward the end of the meeting. The president's daughters and White House staffers also met the pope.

Mr. Obama travels to Ghana following his visit to the Vatican. Before the meeting, Mr. Obama met with the Vatican's secretary of state, Cardinal Tarciso Bertone.