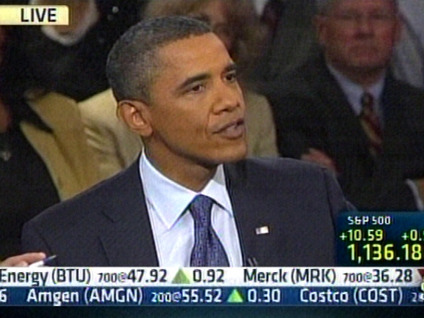 President Obama said today that members of the Tea Party movement are "misidentifying... who the culprits are" in blaming Democrats for the nation's deficits and debt.

The president did offer some words of encouragement for the largely conservative movement, saying it fits in America's "noble tradition of being healthily skeptical about government...[and] saying that government should pay its way."

But he stressed that the administration of George W. Bush that left him with massive deficits in part by spending on two wars without paying for them while at the same time lowering taxes.

As for his own polices, Mr. Obama, appearing at a business town hall hosted by CNBC, said the "majority of economists will tell you that the emergency steps we take are not the problem long term," referring to programs like the stimulus package and the auto bailout.

The Republicans' plan, Mr. Obama said, is not feasible. The GOP, he said, says it can control government spending while proposing $4 trillion in tax cuts.

The reality, Mr. Obama said, is that "the federal government is probably less intrusive now than it was 30 years ago," citing tax rates that are lower now than they were under President Ronald Reagan. He also insisted that his administration has been friendly to business needs and has not proposed raising corporate tax rates.