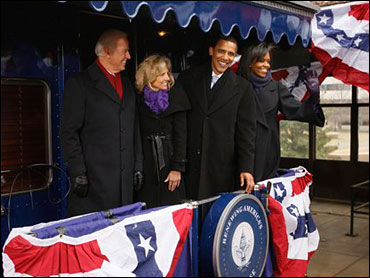 Barack Obama arrived in Washington at the end of a whistle-stop train trip along the frigid mid-Atlantic seaboard that tracked Abraham Lincoln's historic route and brought the president-elect a step closer to inauguration.

Celebratory crowds braved subfreezing weather to salute Obama along his journey from Philadelphia to Washington, D.C.

He will take the oath of office in three days, succeeding President George W. Bush.

At the start, Obama promised to bring the country "a new Declaration of Independence" - free from small thinking, prejudice and bigotry.

The trip included a stop in Delaware to pick up Vice President-elect Joe Biden and a stop in Baltimore for a speech in which he pleaded "let us seek together a better life in our time."

"It's not every day you get to do your daily commute with the next president of the United States," said Biden, who commuted to Washington by train for 36 years. He added, "Folks this is more than an ordinary train ride. This is a new beginning."

Obama invoked a grand heritage of American giants as he appealed "not to our easy instincts but to our better angels," an echo of Lincoln's first inaugural address. He took note of the enormous challenges that lie ahead and promised to act with "fierce urgency," a phrase often used by the Rev. Martin Luther King Jr.

The president-elect's triumphant day - heralded along the 137-mile rail route - was the kickoff to inaugural events leading to Obama's swearing-in Tuesday as the first black U.S. president.

Riding a vintage railcar on his whistle-stop trip, Obama carried with him the hopes of a nation weary of war, frightened of recession and searching for better days.

Biden spoke for many when he said he was excitedly looking forward to Tuesday's inaugural. Then, sobered by the challenges of governing, Biden added: "I think it's Wednesday we need to be ready."

Obama was smiling and confident throughout the day and across the miles, reaching at each stop for history's lessons. In Philadelphia, he noted the risks taken by the men who declared America independent from Britain. In Wilmington, he applauded the state that first ratified the Constitution. And in Baltimore, he hailed the troops at Fort McHenry who beat back the British navy and inspired the poem that became "The Star-Spangled Banner."

But Obama used the trip not only for celebration, but also to warn Americans about the severity and difficulty of the challenges ahead, reports CBS News correspondent Chip Reid

"Only a handful of times in our history has a generation been confronted with challenges so vast," Obama said.

He told the crowd in Philadelphia that the same idealism displayed by the nation's founders was needed to tackle the difficulties of today.

"We recognize that such enormous challenges will not be solved quickly," Obama said. "There will be false starts and setbacks, frustrations and disappointments. And we will be called to show patience even as we act with fierce urgency."

Obama advisors said that today's speeches foreshadow the speech he will give on Tuesday at his inauguration, reports Reid. Tuesday's speech will likely echo the theme that throughout American history, the American people have overcome extraordinary challenges - and that if they come together, they can do it again.

In Washington, a top adviser to Obama said Saturday that the soon-to-be president will convene a meeting of high-ranking military officers to discuss the Iraq war and other issues on his first full day in office.

The adviser said Wednesday's meeting will involve the Joint Chiefs of Staff and other military commanders and aides. The adviser would speak only on condition of anonymity because the meeting has not been formally announced.

Obama's blue rail car was tacked onto the back of a 10-car Amtrak train filled with hundreds of guests, reporters and staff for the ride to Washington.

CBS News correspondent Steve Kathan, traveling on the Inaugural train, reports that dozens of invited guests of the Obama family joined on the trip. Forty-one of the guests were ordinary Americans that Obama and Biden had met during the couse of the presidential campaign.

After he left their car, many of those openly wept with what they described as joy, Reid reports.

Along the journey, Obama and his wife, Michelle, appeared on the back balcony periodically to wave to shivering crowds bundled up in blankets and parkas who had gathered by the dozens, the hundreds and more along the route.

Photos: Inaugural Train Ride
Barack Obama spoke to crowds in Philadelphia, Wilmington and Baltimore in route to Washington D.C. Saturday. The trip retraced the path Abraham Lincoln took to his inauguration. (Photo: AP)
One held a sign that read, "Happy Birthday Michelle," taking note of the future first lady's 45th birthday. Another, in Delaware, waved a placard that said, "We came from Massachusetts 2 C U."

The well-wishers hoped not just for a glimpse of the 44th president-in-waiting but for a cameo role in history.

Joan Schiff, 47, a small business owner who campaigned for Obama, turned out for his departure from Philadelphia.

"It's unreal, it's surreal," she said of Obama's election. Tyson, who is black, said she never thought she'd see a president of color.

The celebratory air was tempered, however, by the tumult of the times, and Obama was quick to acknowledge them.

While talking about the future, Obama reflected on the past, echoing the words of the Declaration of Independence, Lincoln and President John F. Kennedy. He cited the founding fathers who risked everything with no assurance of success in Philadelphia in the summer of 1776:

"They were willing to put all they were and all they had on the line - their lives, their fortunes and their sacred honor - for a set of ideals that continue to light the world: That we are equal. That our rights to life, liberty, and the pursuit of happiness come not from our laws, but from our maker. And that a government of, by, and for the people can endure."

Obama disembarked briefly in Baltimore to address a frozen-but-hearty crowd of more than 40,000, echoing his earlier remarks and alluding to the patriots who defended nearby Fort McHenry against the British and inspired the poem that became "The Star-Spangled Banner."

"We are here today not simply to pay tribute to those patriots who founded our nation in Philadelphia or defended it in Baltimore, but to take up the cause for which they gave so much," he said.

A New Declaration Of Independence

In his speech in Philadelphia, Obama cited Lincoln, John F. Kennedy and the founding fathers.

"Starting now, let's take up in our own lives the work of perfecting our union," he said at the historic 30th Street train station. "Let's build a government that is responsible to the people and accept our own responsibilities as citizens to hold our government accountable. ... Let's make sure this election is not the end of what we do to change America, but the beginning and the hope for the future."

While talking about the future, Mr. Obama reflected on the past, echoing the words of the Declaration of Independence, Lincoln and President John F. Kennedy. He cited the founding fathers who risked all without assurance of success in Philadelphia in the summer of 1776.

"They were willing to put all they were and all they had on the line - their lives, their fortunes, and their sacred honor - for a set of ideals that continue to light the world: That we are equal. That our rights to life, liberty, and the pursuit of happiness come not from our laws, but from our maker. And that a government of, by, and for the people can endure."

It was a momentous day for the Obamas. And for Michelle Obama, it was also time to celebrate her 45th birthday.

The president-elect's triumphant day - a time to be heralded by cheering throngs along the 137-mile rail route - was starting in Philadelphia with a sober discussion of the country's future with 41 people he met during his long quest for the White House.

Temperatures were in the single digits in Philadelphia, but the energy in the room warmed the crowd.

At the outset, he told a crowd gathered in a flag-draped room that the same perseverance and idealism displayed by the nation's founders are needed to tackle the difficulties of today.

"We recognize that such enormous challenges will not be solved quickly," Mr. Obama said. "There will be false starts and setbacks, frustrations and disappointments. And we will be called to show patience even as we act with fierce urgency."

"We are here today not simply to pay tribute to our first patriots but to take up the work that they began," he said. "The trials we face are very different now, but severe in their own right. Only a handful of times in our history has a generation been confronted with challenges so vast."

Preparing to board the train, Mr. Obama said that "what's required is a new declaration of independence - from ideology and small thinking."

Picking Up His VP

The president-elect was traveling from Philadelphia to Wilmington, Del., where he was picking up Vice President-elect Joe Biden, and then Baltimore before arriving at Washington's Union Station after nightfall.

Mr. Obama paid tribute to Biden, who has commuted by Amtrak from Delaware to Congress for several years. He told a cheering crowd that getting things right for the country is the reason he asked Biden "to take one more ride to Washington."

Biden reflected on the crowd and the cold: "A deeper chill of fear and worry and concern [has] gripped the nation. How could it be otherwise? Millions of Americans have been knocked down. Our economy is struggling. We are a nation in a war. Sometimes, just sometimes it's hard to believe that we will see the spring again. But I tell you, spring is on the way with this new administration."

At his Wilmington stop, Mr. Obama plunged into the crowd and greeted the people. He used his talk to voice the same refrain of recent days: the country should not get discouraged because of its dire economic straits.

Although his path tracked Lincoln's and took on the same overtone of high security, it wasn't the journey of virtual secrecy that the 16th president-elect took so long ago on the eve of the Civil War. Lincoln was smuggled under cover of darkness from one train station to another to avoid a feared assassination attempt.