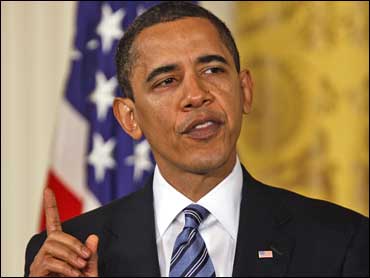 (AP Photo/Ron Edmonds)
Given that he's been hit by more than 130 questions from the press and public in recent days, it's unlikely President Obama will be surprised by any of the questions put to him this evening at his prime time news conference.

Look at this rundown of the events and the number of questions President Obama has faced over the past week:

Wednesday, March 18
- Five questions from reporters at the end of a statement on the A.I.G. bonuses
- Eight questions from the public at his Town Hall Meeting in Costa Mesa, Calif.

Thursday, March 19
- Nine questions from the audience at his Town Hall Meeting in Los Angeles
- More than 50 questions during his appearance on NBC's The Tonight Show with Jay Leno

Sunday, March 22
- Over 59 questions in interview with Steve Kroft on "60 Minutes." (Actually, Kroft asked many more, but not all of them made it on the air.)

It means the president more than likely knows what's on peoples' minds. Further, he has only to read the transcript of yesterday's White House press briefing by his spokesman Robert Gibbs.

He says all the events cited here were designed to give Mr. Obama opportunities to address the American people "about the challenges that the country faces and the choices that he's working on with Congress put our economy back on track and put the nation back on firmer footing."

The White House knows the economic crisis is certain to dominate the session – beginning with the president's opening statement. Mr. Obama can expect to be asked about the administration's handling of the AIG bonuses and the program announced yesterday to use taxpayer funds to buy up to a trillion dollars of the "toxic assets" burdening the balance sheets of the nation's biggest banks.

Questions are also likely on the Congressional Budget Office assessment that the Administration budget plan will produce over $9 trillion in deficits over ten years.

On the foreign front, it's a good bet Mr. Obama will be asked about his outreach last week to the people and government of Iran – and what he thinks of the initial chilly response.

Tonight's q-&-a session in the East Room will be the president's 2nd formal solo White House news conference – but he's had four other press availabilities in between.

- March 18, 2009: An impromptu press availability taking questions after making a statement on the A.I.G. bonuses.

It's also likely he'll also take some questions today at the end of his summit with Prime Minister Kevin Rudd of Australia.

But none of the other recent appearances will give Mr. Obama a bigger audience than he'll get tonight in prime time, defending his policies simultaneously on all the major broadcast and cable news networks.

And that's what the White House looks to tonight's news conference to accomplish.