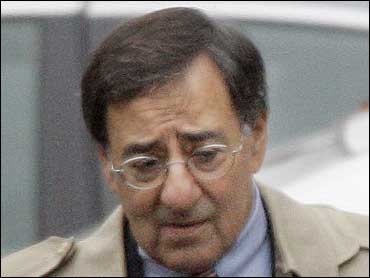 With no experience in the intelligence world, Panetta, a former chief of staff to President Clinton, is a surprise choice to lead the agency. At 70 years old, he would also be the oldest person to begin a tenure as director.

Panetta was a longtime congressman from California, serving from 1977 to 1993. From 1989 to 1993, he served as chairman of the House Budget Committee. He left Congress to become Director of the Office of Management and Budget for the incoming Clinton administration.

In July 1994, he became White House chief of staff and served in that capacity until the end of Mr. Clinton's first term.

Senator Dianne Feinstein, who will chair the Senate Select Committee on Intelligence in the 111th Congress, indicated that she was not pleased with the choice of Panetta.

"I was not informed about the selection of Leon Panetta to be the CIA Director," Feinstein said. "I know nothing about this, other than what I've read."

"My position has consistently been that I believe the Agency is best-served by having an intelligence professional in charge at this time," she added.

"She told me she's not saying she won't vote against him, but it will be an uphill battle now to get him confirmed," Schieffer said.

Panetta currently directs with his wife Sylvia the Leon & Sylvia Panetta Institute for Public Policy, based at California State University, Monterey Bay, a university he helped establish on the site of the former U.S. Army base, Fort Ord. According to his biography, "the Institute serves as a nonpartisan, not-for-profit study center for the advancement public policy, seeking in particular to attract thoughtful men and women to lives of public service."

Panetta also served on the Iraq Study Group, a bipartisan panel that released a report at the end of 2006 with dozens of recommendations for the reversing course in the Iraq war. He was First Lieutenant in the Army from 1964 to 1966.

Blair's nomination has been expected. He served in the Navy for 34 years and was chief of the U.S. Pacific Command during the Sept. 11, 2001 terrorist attacks. Blair is also a China expert, and he was an associate director for military support at the CIA.

He is a workaholic, an expert on Asia, and "is considered adept at running sprawling organizations, seemingly a prerequisite for heading an office that is still grappling with the task of fusing 16 spy agencies," according to the New York Times.