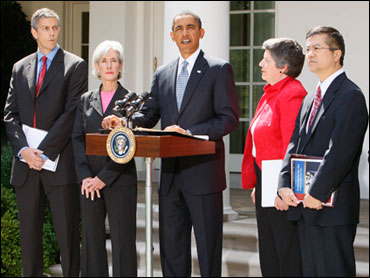 (AP Photo/Charles Dharapak)
Every American has a role to play in responding to the H1N1 flu virus, President Obama said today. During an afternoon statement in the Rose Garden of the White House, Mr. Obama had a message for people to prevent the spread of the disease: Wash your hands frequently, and cover your sneezes with your sleeve, not your hands.

"I don't want anybody to be alarmed, but I do want everybody to be prepared," the president said.

An effective H1N1 vaccine is in the works, Mr. Obama said, and a flu shot program should begin soon, which he said will be voluntary but "strongly recommended."

However, getting vaccinated may be a bit tricky, Oren Cohen, the chief medical and scientific officer for the pharmaceutical services company Quintiles Transnational, explained to the Hotsheet. Quintiles is working on a number of new treatments for influenza.

Cohen said the earliest he estimates a significant number of doses of a vaccine could be available would be mid-October.

"I think this fall it's unlikely we're going to have enough supply of vaccine to go around to the entire population," he said.

Given that reality, Cohen said the Obama administration is responding appropriately by "thinking on their feet and making appropriate judgments as things play out."

Indeed, Mr. Obama said today his administration anticipates that they will have to deal with unexpected issues related to the flu over the next several months.

"The way it's moving is still somewhat unpredictable," he said. "But what I'm absolutely confident about is that our team that's assembled here has done an extraordinary job in preparing for whatever may happen."

The president's emphasis may encourage people to seek out the vaccine, Cohen said, but it will still be an uphill battle to create enough awareness. He said in a normal flu season, only half of those recommended to receive a flu shot actually receive one.

On top of that, the H1N1 vaccine will most likely be require two separate shots, Cohen said. He explained that the virus is different enough from other common viruses that it will take at least two doses to effectively immunize a person from H1N1.

"It does create a logistical challenge to say the least," he said.

The president said today that response plans have been put in place across all levels of government to deal with the second, larger wave of the flu that is expected to hit.

"Our plans and decisions are based on the best scientific information available, and as the situation changes, we will continue to update the public," Mr. Obama said.