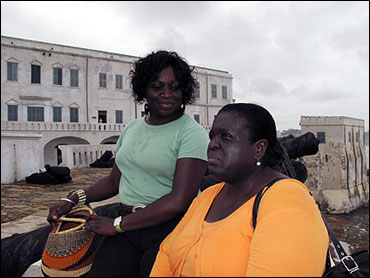 From the rampart of a whitewashed fort once used to ship countless slaves from Africa to the Americas, Cheryl Hardin gazed through watery eyes at the route forcibly taken across the sea by her ancestors centuries before.

"It never gets any easier," the 48-year-old pediatrician said, wiping away tears on her fourth trip to Ghana's Cape Coast Castle in two decades. "It feels the same as when I first visited - painful, incomprehensible."

On Saturday, Barack Obama and his family will follow in the footsteps of countless African-Americans who have tried to reconnect with their past on these shores. Though Mr. Obama was not descended from slaves - his father was Kenyan - he will carry the legacy of the African-American experience with him as America's first black president.

For many, the trip will be steeped in symbolism.

"The world's least powerful people were shipped off from here as slaves," Hardin said Tuesday, looking past a row of cannons pointing toward the Atlantic Ocean. "Now Obama, an African-American, the most powerful person in the world, is going to be standing here. For us it will be a full-circle experience."

Built in the 1600s, Cape Coast Castle served as Britain's West Africa headquarters for the trans-Atlantic slave trade, which saw European powers and African chiefs export millions in shackles to Europe and the Americas.

The slave trade ended here in 1833, and visitors can now trek through the fort's dungeons, dark rooms once crammed with more than 1,000 men and women at a time who slept in their own excrement. The dank air inside still stings the eyes.

"It felt suffocating. It felt still," said Milian, who like her sister lives in Houston, Texas. "I don't know what I expected. I didn't expect to experience the sense of loss, the sense of hopelessness and desolation."

Those who rebelled were packed into similar rooms with hardly enough air to breath, left to die without food or water. Their faint scratch marks are still visible on walls.

Down by the shore is the fort's so-called "Door of No Return," the last glimpse of Africa the slaves would ever see before they were loaded into canoes that took them to ships that crossed the ocean.

Today, the door opens onto a different world: a gentle shore where boys freely kick a white soccer ball through the surf, where gray-bearded men sit in beached canoes fixing lime-green fishing nets, where women sell maize meal from plates on their heads.

Behind them is Africa's poverty: smoke from cooking fires rises from a maze of thin wooden shacks, their rusted corrugated aluminum roofs held down by rocks. Children bathe naked in a tiny dirt courtyard.

"I just can't wrap my mind around this," said Milian, who works at a Methodist church. "If it weren't for all this" - for slavery - "I wouldn't be standing here today. I wouldn't be who I am. I wouldn't have the opportunities I do. I wouldn't practice the religion I do."

Milian also grappled with the irony that fort housed a church while the trade went on, and that African chiefs and merchants made it all possible, brutally capturing millions and marching them from the continent's interior to be sold in exchange for guns, iron and rum.

"It's mixed up," Milian said. "It's not an easy puzzle to put together."

Though slavery in the U.S. ended after the Civil War in 1865, its legacy has lived on. The U.S. Senate on June 18 unanimously passed a resolution apologizing for slavery and racial segregation.

"This is part of our history," said Hardin, who first visited Ghana in the late 1980s and later married a Ghanaian engineer she met in the U.S.

Her 15-year-old son was along for the first time. "I want him to understand what his liberty really means, who he really is," Hardin said.

But racism, both sisters agreed, would not end with Mr. Obama's visit.

"Let's not be naive. When your skin is darker, you are still going to be treated differently," Hardin said. But Obama's trip "will be a turning point, not just for America but for the world."

Milian said Mr. Obama's journey would also bear a message to those who organized the trade.