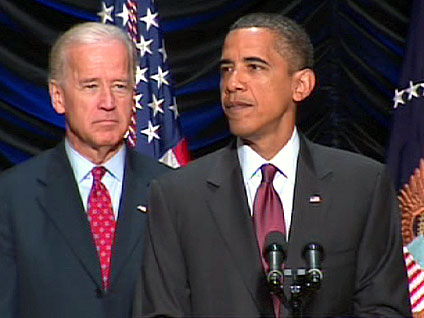 President Obama today signed into law the most sweeping financial industry reform legislation since the Great Depression, hailing the reforms as establishing "the strongest consumer financial protections in history."

Mr. Obama vowed that because of the law, "the American people will never again be asked to foot the bill for Wall Street's mistakes. There will be no more taxpayer-funded bailouts. Period."

In 2008, the financial industry meltdown nearly dragged down the American economy. The president said today that in the future, "if a large financial institution should ever fail, this reform gives us the ability to wind it down without endangering the broader economy."

In addition to creating a Bureau of Consumer Financial Protection and empowering the government to break apart large financial institutions that threaten the economy, the legislation, called the Dodd-Frank Wall Street Reform and Consumer Protection Act, reins in banks' ability to trade in risky financial instruments.

Mr. Obama said the bill was a response to a recession caused primarily by a breakdown in the financial system. That breakdown, he said, was attributable in part to "unscrupulous lenders," firms like AIG that placed "massive, risky bets with borrowed money," and rules that "left abuse and excess unchecked" while leaving "taxpayers on the hook if a big bank or financial institution ever failed."

To pass the bill, the president said, "we had to overcome the furious lobbying of an array of powerful interest groups, and a partisan minority determined to block change." He hailed the array of lawmakers who joined him at the signing for getting the bill finished, particularly Rep. Barney Frank and Sen. Chris Dodd, who led efforts to craft the legislation and who received rapturous applause from their work. He also thanked the three Senate Republicans and House Republicans who broke ranks to back the bill.

The bill passed over objections from Republicans who complained that it did not address the root problems that caused the meltdown.

In a statement following the signing, House Republican leader John Boehner said the bill "provides permanent bailouts for his Wall Street allies at the expense of community banks and small businesses around the country, while doing nothing to reform Fannie Mae and Freddie Mac, the government mortgage companies that triggered the financial meltdown by giving too many high-risk loans to people who couldn't afford them."

Thomas J. Donohue, president of right-leaning business lobbying group The U.S. Chamber of Commerce, called the law "a financial regulatory boondoggle," arguing that "It won't strengthen our capital markets, it won't jumpstart the economy, and it won't help create any new jobs except in government."

The president sought to reassure Wall Street and financial institutions in his remarks, insisting that the reform will "foster innovation, not hamper it."

"It is designed to make sure that everyone follows the same set of rules, so that firms compete on price and quality, not on tricks and not on traps," he said. "It demands accountability and responsibility from everyone. It provides certainty to everybody from bankers to farmers to business owners to consumers."

"And unless your business model depends on cutting corners or bilking your customers, you've got nothing to fear from this reform," he added.

Also present for the signing at the Ronald Reagan building in Washington were two Americans, Robin Fox and Andrew Giordano, who had faced a credit card interest rate increase and overdraft fees. The president pointed to the impact the legislation would have on people like them in an effort to stress its importance for average Americans.

"With this law, unfair rate hikes, like the one that hit Robin, will end for good," he said. "And we'll ensure that people like Andrew aren't unwittingly caught by overdraft fees when they sign up for a checking account."

Mr. Obama said the bill would rein in risky Wall Street practices and bring transparency to the complex transactions that helped cause the financial crisis. He also noted that it gives shareholders greater say in compensation for CEOs and high-ranking executives.

The president did acknowledge that much of the impact of the bill will ultimately be left to regulators and that companies will still have leeway to act irresponsibly. Many provisions in the legislation won't take effect for a year or more as regulators set out the new rules.

"For these new rules to be effective, regulators will have to be vigilant," he said. "We also may need to make adjustments along the way as our financial system adapts to these new changes and changes around the globe. No law can force anybody to be responsible; it's still incumbent on those on Wall Street to heed the lessons of this crisis in how they conduct their businesses."

Close to 400 people were present for the signing, including business leaders (among them Citi CEO Vikram Pandit), lawmakers and consumer advocates. Also present was Elizabeth Warren, among the top candidates to run the Bureau of Consumer Financial Protection.

The president concluded his remarks by stating that there is "no dividing line between Main Street and Wall Street."