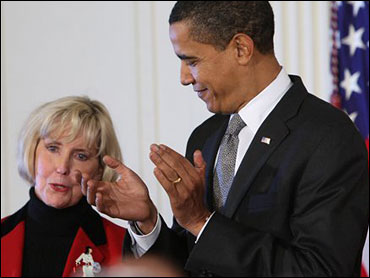 (AP Photo/Ron Edmonds)
Barack Obama today signed the first bill of his presidency, a piece of legislation known as the Lilly Ledbetter Fair Pay Restoration Act that makes it easier for workers to sue after discovering what they believe to be pay discrimination.

In signing the bill, Mr. Obama said that it sends the message "that there are no second class citizens in our workplaces, and that it's not just unfair and illegal, it's bad for business to pay someone less because of their gender or their age or their race or their ethnicity, religion or disability."

(CBS)
The legislation is named after Ledbetter, 70, who worked at Goodyear Tire & Rubber in Alabama for nearly 20 years before discovering that she was being paid less than men who were doing the same job. She became the face of workplace discrimination during Mr. Obama's presidential campaign, speaking at the Democratic National Convention and appearing in commercials for the then-Illinois senator.

The legislation, which Congress passed on Tuesday, effectively overturns a two-year-old, 5-4 Supreme Court decision that found that Ledbetter did not have grounds to sue because she did not discover the alleged pay discrimination within six months of it first taking place.

The bill signed by Mr. Obama today changes the rules so that Ledbetter and workers like her can sue within six months of discovering the alleged pay discrimination, regardless of when it began.

(AP PHOTO)
The Bush White House and Senate Republicans had previously blocked efforts to bring forth such legislation, which they suggested could encourage lawsuits.

The president signed the bill at a ceremony in the East Room of the White House, with Ledbetter at his side. Also present were House Speaker Nancy Pelosi, Secretary of State Hillary Clinton and representatives from women's and labor groups.

"This is only the beginning," the president said. "I know that if we stay focused, as Lilly did -- and keep standing for what's right, as Lilly did -- we will close that pay gap and we will make sure that our daughters have the same rights, the same chances, and the same freedoms to pursue their dreams as our sons."