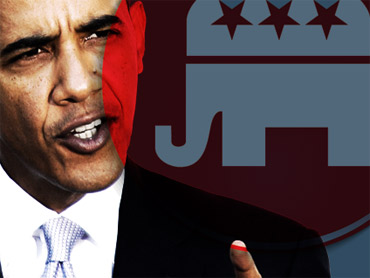 (CBS/ AP)
President Obama has been going out of his way in recent days to reach out to Republicans. But the real winner could be Mr. Obama and his fellow Democrats.

The president's renewed push for bipartisanship grew out of his party's lowest point in the past year: The special election victory by Republican Scott Brown to Ted Kennedy's Massachusetts Senate seat.

It was that victory that ended the Democrats' supermajority in the Senate, prompting hand-wringing among Democrats and celebrations from Republicans anticipating major gains in the 2010 midterm elections.

But Brown's win also meant that Republicans, who have been remarkably unified in their opposition to Democratic proposals, could no longer simply oppose most of the legislation that comes before them -- at least if they want Congress to do more than provide fodder for talking heads on cable television.

Mr. Obama could suddenly make the case that Republicans have a choice: They can either be equal partners in crafting legislation or they can be obstructionists interested in little more than reelection. He kicked off the argument during last week's State of the Union address.

"If the Republican leadership is going to insist that 60 votes in the Senate are required to do any business at all in this town -- a supermajority -- then the responsibility to govern is now yours as well," he told members of the GOP. "Just saying no to everything may be good short-term politics, but it's not leadership. We were sent here to serve our citizens, not our ambitions."

The president has hit that point over and over during the last week as part of an aggressive effort to spotlight what he has cast as Republicans' unwillingness to work together in good faith. 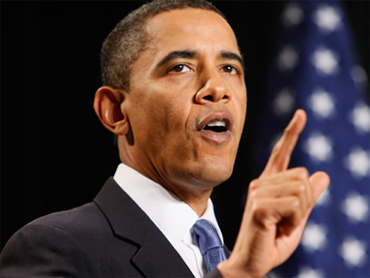 (AP)
On Friday, in what was widely perceived as a victory, Mr. Obama went into enemy territory – a House Republican retreat in Baltimore -- and answered questions with the cameras rolling. He told GOP lawmakers that they had to stop demonizing him as engaged in a "Bolshevik plot" to "destroy America," calling their tone and rhetoric both misleading and counterproductive.

He also suggested Republicans' claims that they have competing legitimate policy ideas were disingenuous, suggesting their positions "can't just be political assertions that aren't substantiated when it comes to actual policy."

It was a key moment in a bitter battle between the parties over who is offering both real ideas and serious outreach to the other side.

Republicans, who are reportedly working on a clear outline of their positions, insist they want to work with Democrats, if only the majority party will come to the table and take their ideas seriously. Democrats, by contrast, are saying they want and need to work with Republicans -- but they are faced with obstructionists whose policy ideas are little more than talking points.

Democrats seem to believe that their best hope to both pass serious legislation and reverse the GOP's momentum going into the midterm elections is to make that case to the American people. They hope to either transform their preferred narrative -- that Congressional Republicans put politics before governing -- into hardened conventional wisdom or force the minority party to blink and abandon its unified opposition to most Democratic policies.

To that end, Mr. Obama is hosting bipartisan brainstorming sessions at the White House beginning next week, and is planning to invite Republicans to Camp David and various events throughout the year.

It is far from clear how effective the effort will be. In a Wednesday meeting with Senate Democrats, the president stressed that members of his party need to "call [Republicans] out when they say they want to work with us and we extend a hand and get a fist in return."

But he also acknowledged that his strategy may well be "naïve."

There are plenty of political consultants in Washington who will tell you that argument does indeed sound naïve – and that adult conversations don't get bills passed or win elections, particularly with unemployment at ten percent.

But the White House seems to have decided that the time has come to wholeheartedly embrace an anti-cynical posture predicated on the notion that politicians can put politics aside and simply do what's best for the American people.

It's a message they believe plays well outside the beltway, even if, after Mr. Obama's first year in office, one could be forgiven for greeting it with a healthy dose of skepticism.