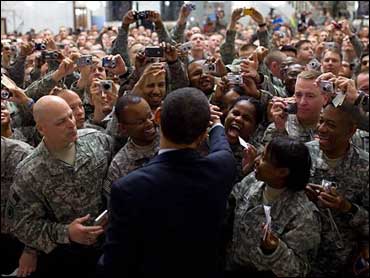 President Barack Obama wants Congress to act quickly on his $83.4 billion request for U.S. military and diplomatic operations in Iraq and Afghanistan, an appeal that's disappointing the most liberal, anti-war wing of his party.

But with the president promising to remove all combat troops from Iraq by the end of August 2010, his Democratic allies in control of Congress are sure to pass his request without the type of tortuous battle that characterized their dealings with former President George W. Bush.

Obama's request Thursday, which included money to send thousands more troops to Afghanistan, would push the cost of the two wars to almost $1 trillion since the Sept. 11, 2001, terrorist attacks, according to the Congressional Research Service. The additional money would cover operations into the fall.

"Nearly 95 percent of these funds will be used to support our men and women in uniform as they help the people of Iraq to take responsibility for their own future - and work to disrupt, dismantle and defeat al Qaeda in Pakistan and Afghanistan," Obama wrote Thursday to House Speaker Nancy Pelosi, D-Calif.

Obama also requested $350 million in new Pentagon funding for counternarcotics and other security activities along the U.S.-Mexico border, with another $400 million in counterinsurgency aid to Pakistan.

In a statement, Pelosi said Congress would carefully review Obama's request and "engage in a dialogue with the administration on appropriate benchmarks to measure the success of our investments."

The request is likely to win easy passage despite frustration among some liberals over the pace of troop withdrawals and Obama's plans for a large residual force of up to 50,000 troops - about one-third of the force now in Iraq - who will train Iraqis, protect U.S. assets and personnel, and conduct anti-terror operations.

It also would finance Obama's initiative to boost U.S. troop levels in Afghanistan to more than 60,000 from the current 38,000. And it would provide $2.2 billion to accelerate the Pentagon's plans to increase the overall size of the U.S. military, including a 547,400-person active-duty Army.

"This funding will do two things: It will prolong our occupation of Iraq through at least the end of 2011, and it will deepen and expand our military presence in Afghanistan indefinitely," said anti-war Rep. Lynn Woolsey, D-Calif.

House GOP leader John Boehner of Ohio predicted Republicans would overwhelmingly support the request, provided that congressional Democrats don't seek to "micromanage" the war by adding a timeline or other restrictions on the ability of military officials to carry on the fight.

Defense Secretary Robert Gates, a holdover from the Bush administration, said, "The reality is the alternative to the supplemental is a sudden and precipitous withdrawal of the United States from both places, and I don't know anybody who thinks that's a good idea." He said, "The reality is it would put everything we have achieved in Iraq at tremendous risk, and I believe it would greatly endanger our troops."

Obama was a harsh critic of the Iraq war as a presidential candidate, a stance that attracted support from the Democratic Party's liberal base and helped him secure his party's nomination. He opposed an infusion of war funding in 2007 after Bush used a veto to force Congress to remove a withdrawal timeline from the $99 billion measure.

But he supported a war funding bill last year that also included about $25 billion for domestic programs. Obama also voted for war funding in 2006, before he announced his candidacy for president.

The request includes $75.8 billion for the military and more than $7 billion in foreign aid.

Obama also warned lawmakers not to succumb to the temptation to use the must-pass war funding bill as a vehicle for other spending. And he said they should act quickly on the request.

"I also urge the Congress to focus on the needs of our troops and our national security, and not to use the supplemental to pursue unnecessary spending," Obama wrote. "I want the Congress to send me a focused bill and to do so quickly."

His new request would push the war and diplomatic money approved for 2009 to about $150 billion. The totals were $171 billion for 2007 and $188 billion for 2008, the year Bush increased the tempo of military operations in a generally successful effort to quell the Iraq insurgency.