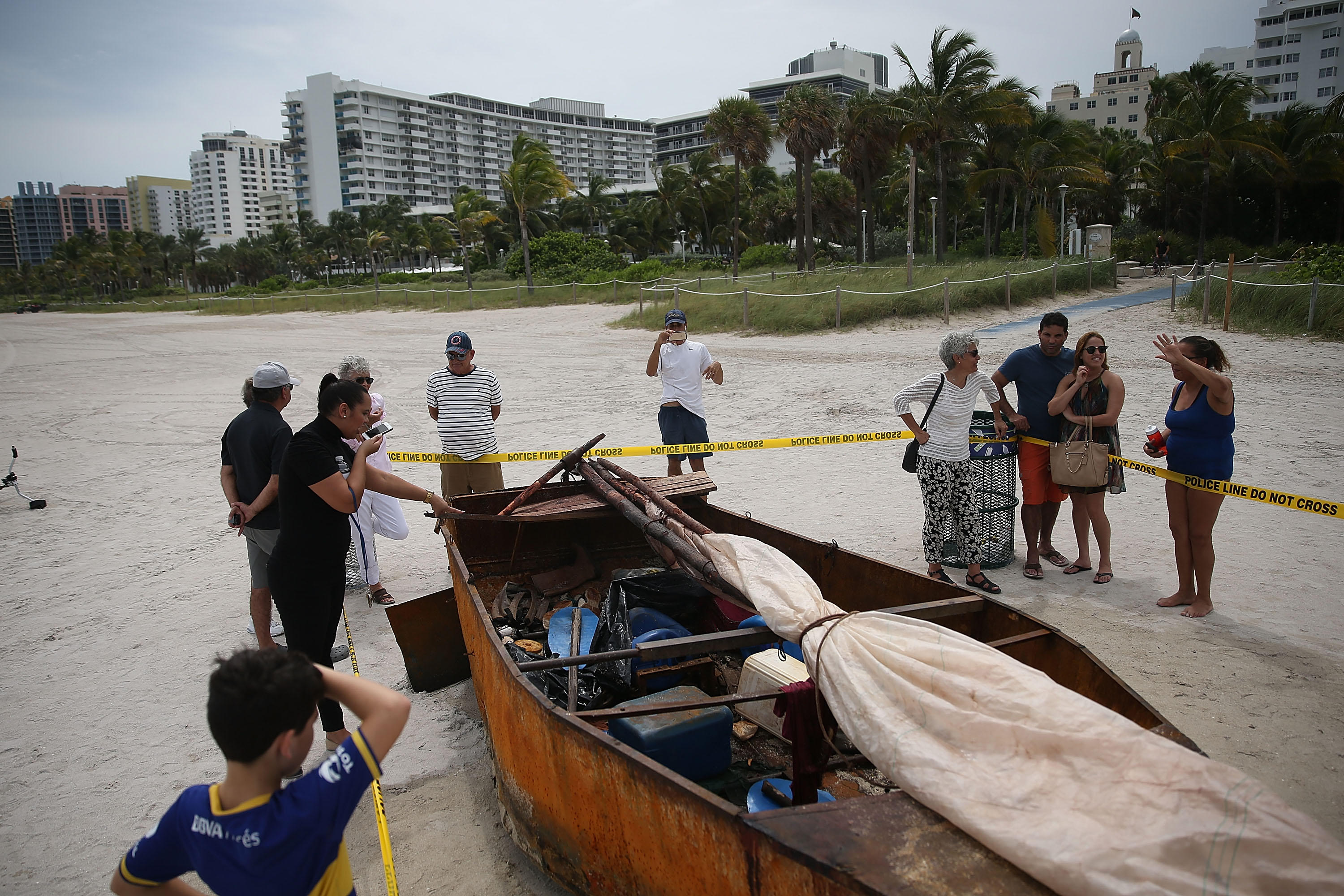 WASHINGTON -- Citing the sharp uptick in the number of Cuban migrants to U.S. shores since the 2014 reopening of relations, Homeland Security Secretary Jeh Johnson announced a repeal of the “wet foot, dry foot” policy effectively immediately and that Havana has agreed to amend domestic laws to accept those deported, CBS News’ Margaret Brennan reported.

The policy change will not result in the immediate deportations of Cubans already in the U.S. The policy applies going forward to those who arrive in the U.S. illegally by land or sea. Cubans will be treated like any other migrants and will still be able to apply for asylum based on their individual cases. The Cuban Family Reunification Parole Program will continue. The Coast Guard will continue to interdict migrants at sea.

Ben Rhodes, Obama’s deputy national security adviser, acknowledged that the White House had previously denied it would adopt the policy, but said today that this was in part due to the fact that the U.S. did not want to encourage more Cubans to flee. He said that the majority of those fleeing Cuba in recent years are doing so for “economic opportunity” and not due to political persecution. Asylum is still available for those who have legitimate claims of persecution.

The policy change is something Cuba has wanted for decades and is part of Mr. Obama’s normalization of relations.

Despite the change, however, the framework for “wet foot, dry foot” - the Cuban Adjustment act - remains in place. The White House is calling on Congress to repeal it.

The new agreement does not change the existing 1994/1995 accord with Cuba stipulating that the U.S. will accept 20,000 Cubans per year. Those are people who would come to the U.S. through authorized procedures.

The Washington Office on Latin America (WOLA), an advocacy organization in Washington, D.C. that works to advance human rights in the Americas, said it supports the change in policy.

“The Obama Administration has taken a positive step toward a more sensible Cuban immigration policy, one that ends preferential treatment for Cubans compared with others who arrive without visas,” WOLA Program Director Geoff Thale said in a statement on Thursday.

Thale said, “WOLA and many colleagues have recommended to the Administration that it should both end preferential treatment for Cubans and increase the number of visas available to Cubans who pursue regular immigration routes.”

The U.S. and Cuba released a joint statement late Thursday confirming the change in policy.

The “wet foot, dry foot” policy was put in place in 1995 by President Bill Clinton as a revision of a more liberal immigration policy. Until then, Cubans caught at sea trying to make their way to the United States were allowed into the country and were able to become legal residents after a year. The U.S. was reluctant to send people back to the communist island then run by Fidel Castro, and the Cuban government also generally refused to accept repatriated citizens.

The Cuban government has in the past complained bitterly about the special immigration privileges, saying they encourage Cubans to risk dangerous escape trips and drain the country of professionals. But it has also served as a release valve for the single-party state, allowing the most dissatisfied Cubans to seek better lives outside and become sources of financial support for relatives on the island.

The changes would be the latest step by Obama to normalize relations with Cuba.

Relations between the United States and Cuba were stuck in a Cold War freeze for decades, but Obama and Cuban President Raul Castro established full diplomatic ties and opened embassies in their capitals in 2015. Obama visited Havana last March.

U.S. and Cuban officials were meeting Thursday in Washington to coordinate efforts to fight human trafficking. A decades-old U.S. economic embargo, though, remains in place as does the Cuban Adjustment Act which lets Cubans become permanent residents a year after legally arriving in the U.S.

The official said that in recent years, most people fleeing the island have done so for economic reasons or to take advantage of the benefits they know they can receive if they make it to the U.S.

The official also cited an uptick in Cuban migration, particularly across the U.S.-Mexico border - an increase the official said reflected an expectation among Cubans that the Obama administration would soon move to end their special immigration status.

Since October 2012, more than 118,000 Cubans have presented themselves at ports of entry along the border, according to statistics published by the Homeland Security Department. During the 2016 budget year, which ended in September, a five-year high of more than 41,500 people came through the southern border. An additional 7,000 people arrived between October and November.

The influx has created burdens on other countries in the region that must contend with Cubans who have yet to reach the U.S. border, the official said.

The Cuban Medical Professional Parole Program, which was started by President George W. Bush in 2006, is also being rescinded. The measure allowed Cuban doctors, nurses and other medical professionals to seek parole in the U.S. while on assignments abroad.

People already in the pipeline under both “wet foot, dry foot” and the medical parole program will be able to continue the process toward getting legal status.

The preferential treatment for Cubans reflected the political power of Cuban-Americans, especially in Florida, a critical state in presidential elections. That has been shifting in recent years. Older Cubans, particularly those who fled Castro’s regime, tend to reject Obama’s diplomatic overtures to Cuba. Younger Cuban-American voters have proven less likely than their parents and grandparents to define their politics by U.S.-Cuba relations. Exit polls show President Barack Obama managed roughly a split in the Florida Cuban vote in 2012, and Trump in November won the same group by a much narrower margin than many previous Republican nominees.