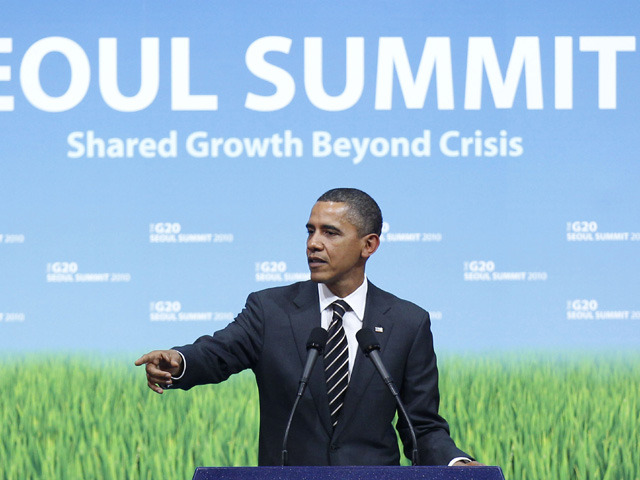 At a press conference in Seoul, South Korea, on Friday, President Obama said he was committed to working with Democrats and Republicans during the lame duck session to guarantee the extension of middle-class tax cuts, but denied that meant he was necessarily willing to cave on the matter of extending those cuts for wealthy Americans.

"I'm going to meet with both the Republican and Democratic leaders late next week and we're going to sit down and discuss how we move forward," Mr. Obama said. "My number-one priority is making sure that we make the middle-class tax cuts permanent, that we give certainty to the 98 percent of Americans who are affected by those tax breaks. I don't want to see their income taxes spike up -- not only because they need relief after having gone through a horrendous recession, but also because it would be bad for the economy."

Mr. Obama refuted the idea, however, that comments made by David Axelrod, a senior adviser to the president, could be interpreted to mean that his compromise position was to temporarily extend the Bush-era tax cuts.

"That is the wrong interpretation because I haven't had a conversation with Republican and Democratic leaders," Mr. Obama said in response to a question. "Here's the right interpretation. I want to make sure that taxes don't go up for middle-class families starting on January 1st. That's my number-one priority -- for those families and for our economy."

Mr. Obama emphasized repeatedly his belief that "it would be fiscally irresponsible" to extend tax cuts for high-earning Americans. "I think that would be a mistake, particularly when we've got our Republican friends saying that their number-one priority is making sure that we deal with our debt and our deficit," he said.

When asked if he thought that the Democratic party would benefit from "new blood, new leadership," the president backed up outgoing House Speaker Nancy Pelosi, as well as Senate Majority Leader Harry Reid.

"I think Speaker Pelosi has been an outstanding partner for me," Mr. Obama said. "I think Harry Reid has been a terrific partner in moving some very difficult legislation forward. And I'm looking forward to working with the entire leadership team to continue to make progress on the issues that are important to the American people."

The president, who delivered his remarks at the conclusion of the G-20 summit, headed to Japan today for the APEC economic summit, the final stop in his ten-day diplomatic tour of Asia.

He emphasized that he does not plan to immerse himself in serious congressional negotiations regarding tax cuts until he is back in the United States. "I'm not going to negotiate here in Seoul on those issues," Mr. Obama said today. "But I've made very clear what my priorities are."

Lucy Madison is a political reporter for CBSNews.com. You can read more of her posts here. Follow Hotsheet on Facebook and Twitter.
View CBS News In