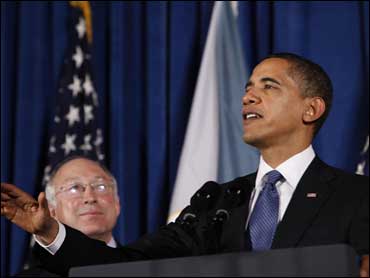 (AP)
During remarks at the Department of the Interior today, President Obama announced his signing of a memorandum to "help restore the scientific process to its rightful place at the heart of the Endangered Species Act."

The memorandum, which the White House sent out this afternoon, reverses a move made by the Bush administration in December.

Just before the end of President Bush's term, an Endangered Species Act requirement that federal agencies consult with the U.S. Fish and Wildlife Service and/or the National Marine Fisheries Service before taking actions that could harm threatened and endangered species was removed.

Those two agencies, the memorandum notes, "have the primary responsibility to ensure that the ESA is implemented in accordance with the law."

The memorandum calls for a review of the Bush administration's move by the Commerce and Interior secretaries and says that agencies should continue to consult with the two services while the review is going on.

"The work of scientists and experts in my administration, including here at the Interior Department, will be respected," the president said. "With smart, sustainable policies, we can grow our economy today and preserve the environment."

Full text of the memorandum is below.

MEMORANDUM FOR THE HEADS OF EXECUTIVE DEPARTMENTS AND AGENCIES

The Endangered Species Act (ESA), 16 U.S.C. 1531 et seq., reflects one of the Nation's profound commitments. Pursuant to that Act, the Federal Government has long required a process of broad interagency consultation to ensure the application of scientific and technical expertise to decisions that may affect threatened or endangered species. Under that interagency process, executive departments and agencies (agencies) contemplating an action that may affect endangered or threatened species have long been required, except in certain limited circumstances, to consult with, and in some circumstances obtain the prior written concurrence of, the Fish and Wildlife Service (FWS) and/or the National Marine Fisheries Service (NMFS) -- the expert agencies that have the primary responsibility to ensure that the ESA is implemented in accordance with the law.

On December 16, 2008, the Departments of the Interior and Commerce issued a joint regulation that modified these longstanding requirements. See 73 Fed. Reg. 76272. This new regulation expands the circumstances in which an agency may determine not to consult with, or obtain the written concurrence of, the FWS or NMFS prior to undertaking an action that may affect threatened or endangered species. But under the new regulation, agencies may continue the previous practice of consulting with, and obtaining the written concurrence of, the FWS and NMFS as a matter of discretion.

I hereby request the Secretaries of the Interior and Commerce to review the regulation issued on December 16, 2008, and to determine whether to undertake new rulemaking procedures with respect to consultative and concurrence processes that will promote the purposes of the ESA.

Until such review is completed, I request the heads of all agencies to exercise their discretion, under the new regulation, to follow the prior longstanding consultation and concurrence practices involving the FWS and NMFS.

This memorandum is not intended to, and does not, create any right or benefit, substantive or procedural, enforceable at law or in equity by any party against the United States, its departments, agencies, or entities, its officers, employees, or agents, or any other person. Agencies shall carry out the provisions of this memorandum to the extent permitted by law and consistent with statutory authorities.

The Secretary of the Interior is hereby authorized and directed to publish this memorandum in the Federal Register.