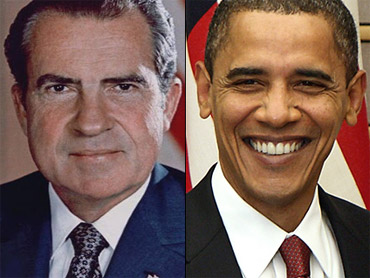 President Barack Obama appeared to be taking a page from Richard Nixon's playbook Wednesday when he seemed to declare the suspected Sept. 11 mastermind Khalid Sheikh Mohammed guilty and deserving of the death penalty.

In Nixon's case, he pronounced cult leader Charles Manson guilty of several murders while Manson was being tried in a California state court for killing actress Sharon Tate and others.

Obama, in a series of TV interviews during his trip to Asia, said those offended by the legal rights accorded Mohammed by virtue of his facing a civilian trial rather than a military tribunal won't find it "offensive at all when he's convicted and when the death penalty is applied to him."

Obama, who is a lawyer, quickly added that he did not mean to suggest he was prejudging the outcome of Mohammed's trial. "I'm not going to be in that courtroom," he said. "That's the job of the prosecutors, the judge and the jury."

Nixon quickly withdrew his remark as well, saying, "The last thing I would do is prejudice the legal rights of any person, in any circumstances."

But Manson tried to use the comment to his advantage. He stood up in court the next day and showed jurors a newspaper with the headline, "Manson Guilty, Nixon Declares."

The judge took the unusual step of asking jurors their reaction to the headline. "If the president did say that, it was pretty stupid of him," one juror, William T. McBride II, said.

The judge denied the Manson defense team's demand for a mistrial. Manson was later convicted.

Historians and a legal ethicist said they don't expect Obama's remark to affect Mohammed's trial but called the president's comments ill-advised. The head of a defense lawyers organization said Obama made the hard job of finding an impartial jury tougher.

It will be months, if not years, before a jury is assembled to try Mohammed. The trial will take place just a few blocks from the site of the World Trade Center and the jurors will be New Yorkers.

The notion that otherwise impartial New Yorkers would be compromised by Obama's comment is far-fetched, said Steven Lubet, a legal ethicist at Northwestern University.

"This is one of your daily tempests in a teapot," said University of Wisconsin historian Stanley Kutler. "It's not going to change anything."

But Cynthia Hujar Orr, president of the National Association of Criminal Defense Lawyers, said Obama only made it harder to find an impartial jury. "It's already very difficult to get a fair proceeding in any of these high-profile cases," Orr said.

Giuliani: 9/11 Trial Part of Left-Wing Political Agenda
KSM Trial: A Confederacy for Dunces
Why Terrorists Don't Deserve A Court Date
Holder Defends Moving Terror Trials to NYC
Unplugged: Pros and Cons Of 9/11 Trials In New York
What Could Go Wrong at KSM Trial, and How to Avoid It