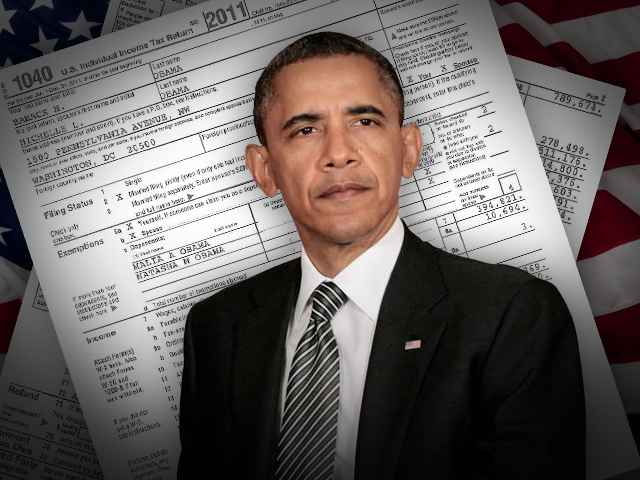 Mr. Obama and First Lady Obama filed their income tax returns jointly and reported adjusted gross income of $789,674. They paid $162,074 in taxes, at an effective rate of 20.5 percent. The first family also reported paying $31,941 in state income tax to Illinois.

The latest information comes amid Mr. Obama's campaign to enact the "Buffett rule" to ensure that the wealthiest Americans pay an overall tax rate comparable to middle class tax rates. The White House pointed out that under the tax policies endorsed by the president, like the expiration of the Bush-era tax cuts, Mr. Obama would pay more in taxes.

It's worth noting, however, that Mr. Obama wouldn't be hit by the version of Buffett rule, since he made less than $1 million last year. The current version of the legislation, which the Senate will take up next week, would mandate that income above $2 million would be taxed at least at a 30 percent rate, with a graduated boost in the minimum marginal rates for income between $1 million and $2 million.

"The President and the Vice President released their tax returns today so that Americans can review their personal finances, understand how they earn their income and ensure there are no conflicts with the interests of the nation," Obama campaign manager Jim Messina said in a statement. "But on the eve of April 17th, Governor Romney has yet to provide tax returns from the period in which he made hundreds of millions as a corporate buyout specialist, or as governor of Massachusetts, the experience he says qualifies him to be president."

Romney has released his 2010 tax returns and estimates for 2011, showing he paid an effective tax rate of 15.4 percent last year and an effective rate of 13.9 percent in 2010. Still, the Obama campaign is questioning why Romney won't release the returns from years past, during his tenure as Massachusetts governor or when he served as head of Bain Capital, even after giving the 2008 McCain campaign 23 years of returns. Mr. Obama has released his returns as far back as 2000.

On top of that, the presumptive GOP presidential nominee has been dogged by questions of transparency after a report showed he took advantage of legal loopholes to avoid disclosing details of his financial holdings.

The Romney campaign responded that the GOP candidate will release his full 2011 return when it is filed but will not be immediately releasing anymore more tax forms.

"It's no surprise with the worst job creation record in modern history that President Obama would try to distract Americans from the real issues with a series of sideshows," Romney campaign spokesperson Andrea Saul said in response to the Obama team's attacks.

Mr. Obama's returns show that this year, about half of his family's income came from Mr. Obama's salary while the other half came from the sales proceeds of his books. The Obamas also reported donating $172,130, about 22 percent of their adjusted gross income, to 39 different charities. The largest contribution the Obamas reported was $117,130 to the Fisher House Foundation, a scholarship fund for children of fallen and disabled soldiers. Mr. Obama is donating all after-tax proceeds from the children's book he wrote, "Of Thee I Sing," to the foundation.

Vice President Biden and Jill Biden also filed joint returns, reporting an adjusted gross income of $379,035. The Bidens paid $87,900 in total federal tax for 2011, for an effective rate of 23 percent.

UPDATE, 5:25 p.m. Eastern Time: The Romney campaign has announced that Romney has filed an extension.

"Sometime in the next six months, and prior to the election, Gov. Romney will file and release the 2011 return when there is sufficient information to provide an accurate return," said spokeswoman Andrea Saul.