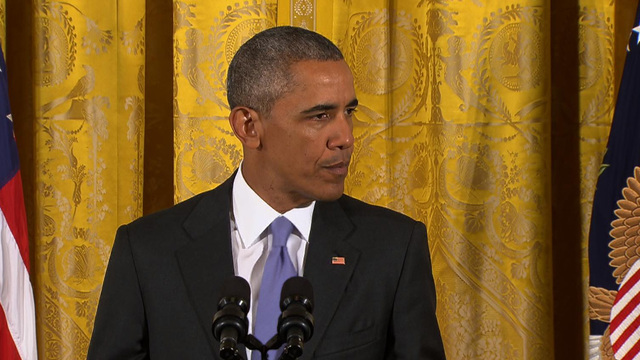 Major Garrett: As you well know, there are four Americans in Iran - three held on trumped up charges according to your administration, one, whereabouts unknown. Can you tell the country, sir, why you are content, with all of the fanfare around this [nuclear] deal to leave the conscience of this nation, the strength of this nation, unaccounted for, in relation to these four Americans?

President Obama: I've got to give you credit, Major, for how you craft those questions. The notion that I am content, as I celebrate with American citizens languishing in Iranian jails - Major, that's nonsense. And you should know better. I've met with the families of some of those folks. Nobody's content, and our diplomats and our teams are working diligently to try to get them out.

Now, if the question is why we did not tie the negotiations to their release, think about the logic that that creates. Suddenly, Iran realizes, you know what, maybe we can get additional concessions out of the Americans by holding these individuals - makes it much more difficult for us to walk away if Iran somehow thinks that a nuclear deal is dependent in some fashion on the nuclear deal. And by the way, if we had walked away from the nuclear deal, we'd still be pushing just as hard to get these folks out. That's why those issues are not connected, but we are working every single day to try to get them out and won't stop until they're out and rejoined with their families.

With respect to the Chairman's testimony, to some degree I already answered this with Carol. We are not taking the pressure off Iran with respect to arms and with respect to ballistic missiles. As I just explained, not only do we keep in place for five years the arms embargo this particular new UN resolution, not only do we maintain the eight years on the ballistic missiles under this particular UN resolution, but we have a host of other multilateral and unilateral authorities that allow us to take action where we see Iran engaged in those activities - whether it's six years from now or 10 years from now.

So, we have not lost those legal authorities, and in fact part of my pitch to the GCC countries, as well as to Prime Minister Netanyahu, is we should do a better job making sure that Iran's not engaged in sending arms to organizations like Hezbollah, and as I just indicated, that means improving our intelligence capacity and our interdiction capacity with our partners.