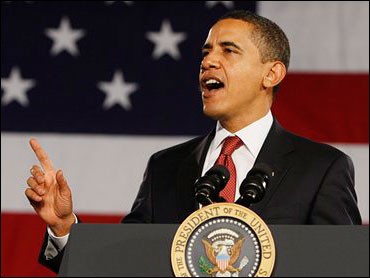 President Barack Obama pushed for his emergency economic stimulus with an urgent one-two punch Monday, addressing the nation in the first prime-time news conference of his presidency after taking his campaign directly to recession victims in hard-hit Indiana.

"Doing nothing is not an option," Obama warned during a town hall meeting in Elkhart, Ind., where unemployment has passed 15 percent.

The president emerged to shrieks from about 1,700 at the appearance, reports CBS News producer Robert Hendin, and many screamed and chanted "Obama, Obama, Obama." (Read more from the scene at the Political Hotsheet blog.)

Speedy passage of legislation to pump federal money into the crippled economy, once seemingly assured with bipartisan support, has become a much heavier lift and a major test of Obama's young presidency.

On the day that an $838 billion version of the legislation cleared a crucial test vote in the Senate, Obama warned darkly of the consequences he contended would result from inaction. By a 61-36 margin, the package was advanced toward a vote on final Senate passage Tuesday - with all but three Republican senators opposing it.

"Our nation will sink into a crisis that at some point we may be unable to reverse," he said. Officials have frequently suggested the current recession, which has catapulted the unemployment rate to 7.6 percent and erased 3.6 million jobs, is the worst U.S. economic crisis since the Great Depression of the 1930s. But no one has been suggesting the economic downturn could be permanent.

The Midwest community where Obama traveled Monday has been hammered by job losses in its mainstay industry of recreational vehicle makers. The unemployment rate soared to 15.3 percent in one northern Indiana county in December, up 10.6 percentage points from a year earlier. White House planners wanted Obama surrounded by everyday Americans already reeling from the effects of the nation's economic woes, with the clear implication that many more towns across the nation could end up the same if nothing is done.

The president then was capping the day with his first formal, extended news conference, where he was fielding queries from the White House press corps amid the grandeur of the East Room - less than a mile from the ongoing debate on Capitol Hill. Most important: he was doing so at the prime TV-watching hour, to be piped into millions of living rooms across the country.

It's a time-honored presidential strategy: Sometimes it takes talking directly to voters for lawmakers to really hear.

"I've got to go back to Washington and convince everybody to get moving on this package," Obama told his Indiana audience of about 1,700 as he wrapped up his question-and-answer session there.

Originally, aides had insisted that Obama's time would be better spent remaining in Washington to shepherd the stimulus bill and meet with lawmakers, rather than traveling around the country to build grass-roots support that would then build pressure on Capitol Hill.

But as difficulties with the legislation grew, aides scheduled the Monday trip, as well as others to hard-luck communities. Obama is traveling on Tuesday to Fort Myers, Fla., and on Thursday to Peoria, Ill.

The Senate was expected to give its version of the stimulus final approval on Tuesday.

It remained to be seen, however, how much Republican support it would draw, as rare congressional debate over the weekend failed to gather meaningful GOP backing. And the Senate version must be reconciled with a $820 billion House bill.

"This is a spending bill, not a stimulus bill," said Sen. Lamar Alexander, R-Tenn.

The two measures overlap in many ways, by combining hundreds of billions of dollars in government spending with tax cuts designed to increase spending by consumers. But the Senate bill has a greater emphasis on tax cuts, while the House bill devotes more money to states, local governments and schools.

"I'm not going to tell you that this bill is perfect. It's coming out of Washington - it's going through Congress," the president said, drawing laughter. "But it is the right size, it is the right scope, broadly speaking it has the right priorities to create jobs that will jump-start our economy and transform this economy for the 21st century."

Obama has demanded a bill on his desk by next Monday's Presidents Day holiday, a timetable that would require the difficult House-Senate negotiations and subsequent votes in both chambers to be complete by the end of this week.

The Gallup Organization released a poll Monday showing Obama's approval rating holding steady at 67 percent, with Congress much less popular. Republicans in Congress drew only 31 percent approval, and Democrats had 48 percent. The poll also showed that 80 percent think it's either important or critically important that a stimulus plan be approved.

A Pew Research Center poll, also out Monday, found a small erosion of support for the stimulus package, but said 51 percent were still in favor of it.

The White House is calculating that numbers like these, combined with Obama's drumbeat from the White House, will win the day.