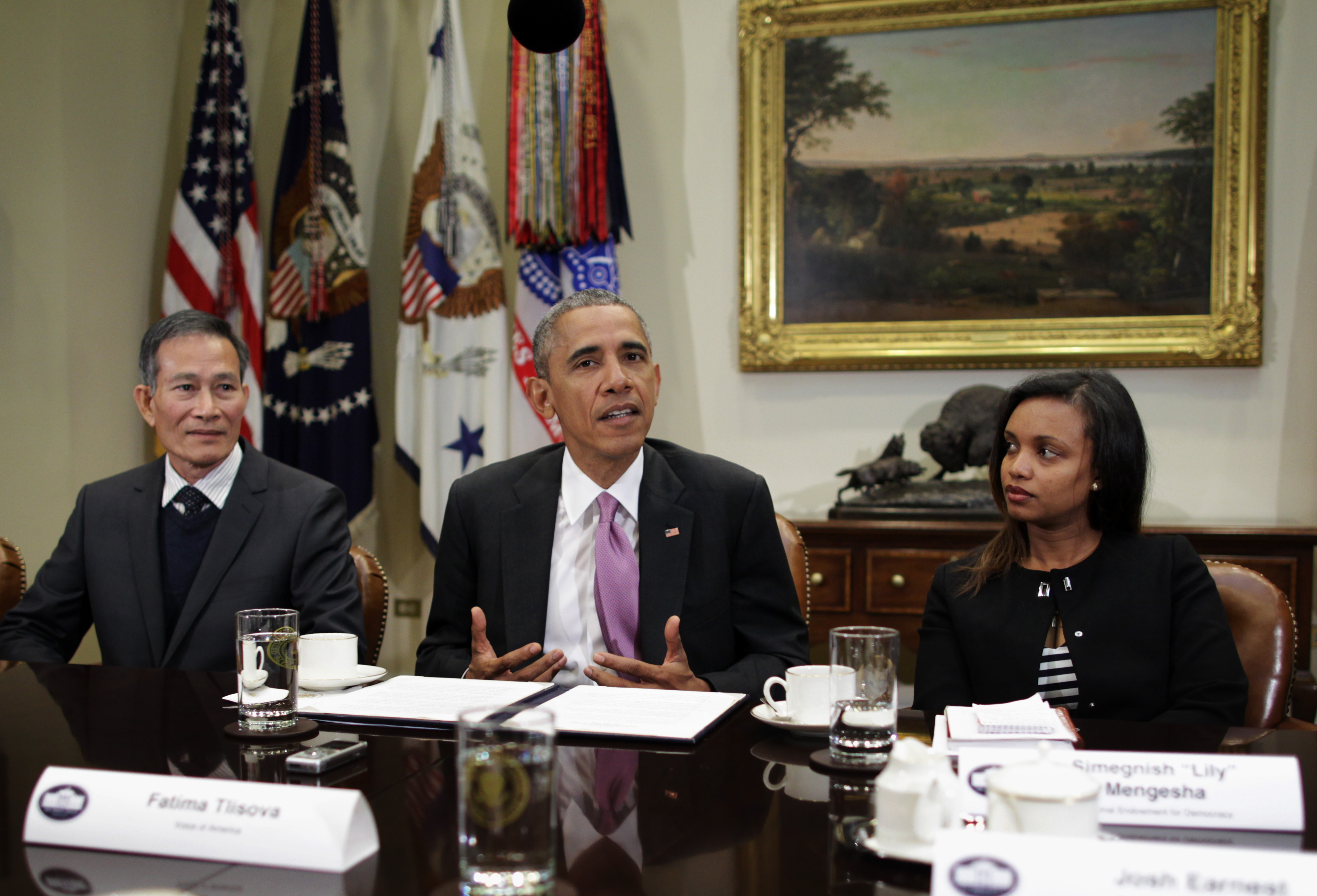 President Obama held a roundtable Wednesday with persecuted journalists from around the world, marking World Press Freedom Day with a tribute to the "vital role that a free press plays in democracy."

"Journalists give all of us as citizens the chance to know the truth about our countries, ourselves, our governments," he said. "That makes us better, it makes us stronger, it gives voice to the voiceless, it exposes injustice, and holds leaders like me accountable."

"Unfortunately, in too many places around the world, a free press is under attack by governments that want to avoid the truth," the president added. "Journalists are harassed, sometimes even killed, independent outlets are shut down, dissent is silence, and freedom of expression is stifled."

The president was flanked during his remarks by three journalists - one Ethiopian, one Vietnamese, and one Russian -- who have faced persecution abroad. "I heard firsthand...from all of them the importance of all of us, including the United States government, speaking out on behalf of the values of freedom of the press," Mr. Obama said.

In recognition of World Press Freedom Day, which takes place on Sunday, the president agreed to field a question. He offered his reaction to the ongoing tension in Baltimore, where protestors welcomed Friday's indictment of six cops for the murder of a young black man who died in police custody.

Despite the president's praise for the journalists at Wednesday's event, though, his own administration has cultivated a rather mixed record on press freedom and transparency.

He took office in 2009 with a pledge to operate the "most transparent" administration in history. And there have been significant gestures to that end, as Jason Ross Arnold, a political science professor at Virginia Commonwealth University, catalogues on the 'Monkey Cage' academic blog.

The Obama administration "revoked President George W. Bush's pro-secrecy changes to the Presidential Records Act. It introduced the Open Government Directive, which pushed agencies to proactively publish data and develop public feedback mechanisms. It began the Open Government Partnership, which promotes and institutionalizes open government norms," Arnold wrote. "The president also steered the government back toward the Clinton-era 'maximum responsible disclosure' standard for Freedom of Information Act (FOIA) requests, after the Bush administration had pushed in the other direction."

On some other issues, though, the administration has frustrated press freedom and transparency advocates who say the it simply hasn't lived up to the president's vow of openness.

The United States was ranked 49th of 180 countries around the world in the in 2015 press freedom rankings from Reporters Without Borders, a non-profit group dedicated to protecting journalists and their freedom of expression. America's ranking has fallen precipitously in recent years: In 2009, when Mr. Obama took office, the U.S. was ranked 20th.

Reporters Without Borders blamed the decline on the administration's aggressive prosecution of whistleblowers, citing the "judicial harassment" of James Risen, a New York Times reporter who prevailed over intense pressure from government prosecutors to release the source of sensitive information he published about the CIA.

"Eric Holder has sent a message to dictators around the world that it is okay to crack down on the press and jail journalists," he wrote. "I plan to spend the rest of my life fighting to undo damage done to press freedom in the United States by Barack Obama and Eric Holder."

Holder, in his speech, suggested the administration has been more judicious in prosecuting leakers than they could have been.

"We have turned away [a] substantially greater number of cases that were presented to us where prosecution was sought," he said.

Amid its determination to prevent sensitive information from slipping out the back door, the administration hasn't exactly been eager to push it out the front door, either.

An Associated Press analysis found that the administration set a record last year for censoring or flatly denying access to documents sought under the Freedom of Information Act. Of 714,231 requests in fiscal year 2014, the government censored or blocked the release of files in 250,581 cases, or roughly 39 percent of the time.

In 215,584 additional cases, the government either determined the FOIA request was inappropriate, failed to locate the records in question, or declined to release the records after the party requesting them refused to pay for copies.

The administration, taking its own approach to the same data, has argued that its record of releasing information is more encouraging than critics would suggest. Excluding instances in which a party refused to pay for copies of the record, the government couldn't find record, or the record was determined inappropriate for release, the White House caluculated it released all or part of records in 91 percent of FOIA requests.

"When it comes to our record on transparency, we have a lot to be proud of," White House press secretary Josh Earnest said in February. "And frankly, it sets a standard that future administrations will have to live up to."