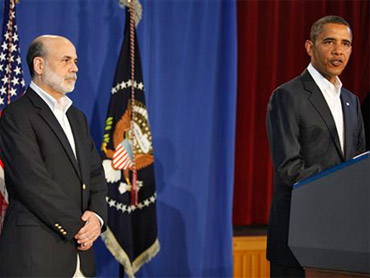 President Obama took a break from his vacation on Martha's Vineyard today to nominate Federal Reserve Chairman Ben Bernanke for a second term. The president said Bernanke's "bold action and outside-the-box thinking" were to thank for helping slow the dramatic effects of the financial crisis.

"As an expert on the causes of the Great Depression, I'm sure Ben never imagined that he would be part of a team responsible for preventing another," Mr. Obama said in his prepared remarks.

The president said that he wants Ben Bernanke to head the Federal Reserve for another four years because he, more than anyone else, pulled the economy back from the brink of yet another depression. Bernanke's term, though, doesn't end until January.

So why did the president suddenly interrupt his vacation to make an early morning announcement?

It's all about timing, reports CBS News chief White House correspondent Chip Reid. The president spoke at about 9 a.m. - half an hour before the markets opened. Bernanke is popular on Wall Street, and as expected the markets ticked up on the news.

But even more important, the president wanted to get out in front of bad economic news also due at 9:30 - that's when the White House Budget Office announced the deficit over the next 10 years will be a staggering $9 trillion, up from a previous estimate of $7 trillion, Reid reports.

The president also said the economy is now recovering, pointing to the auto industry, business investment, and housing and credit markets as signs of stabilization. But he warned that the country is not in the clear yet, and that Americans cannot expect to return to the same financial system that was in place before the recession.

"We have already seen how lax enforcement and weak regulation can lead to enormous wealth for a few and enormous pain for everyone else. And that's why even though there is some resistance on Wall Street from those who prefer things the way they are, we will pass the reforms necessary to protect consumers, investors, and the entire financial system. And we will continue to maintain a strong and independent Federal Reserve," Mr. Obama said.

After Mr. Obama's remarks, Bernanke thanked the president, employees of the Federal Reserve Bank and his family. He pledged to work as hard as he could in the coming years.

With the president's approval rating at its lowest level yet, the last thing he needs now is news of sky-rocketing deficits on one side of the screen, while he plays a relaxing game of golf on the other, Reid reports. So the White House decided to replace that image with a different one: The president praising Fed Chairman Bernanke.

Bernanke was not the president's first choice. After all, he's a republican first appointed by President Bush. Larry Summers, the president's top economic advisor, was considered the leading candidate.

But in these perilous economic times, the president was boxed in. Picking a new untested Fed chief could rattle the markets. And the White House could hardly afford another distraction if a new candidate turned out to be controversial.

The reappointment of Bernanke as Fed chief was expected, although it came sooner than anticipated, said Walter Gerasimowicz, chairman and CEO of Meditron Asset Management in New York.

Bernanke's nomination, which has to be confirmed by the Senate, will provide a "bit of a market boost," Gerasimowicz said. Removing the uncertainty about any potential replacement and Bernanke's aggressive moves to limit the damage from the financial crisis, including keeping interest rates at historic lows, should put investors at ease, Gerasimowicz said.

Bernanke does have his critics. Some say he was asleep at the switch while greedy bankers plundered the economy. Others accuse him of mortgaging the nation's future by bailing out Wall Street

Bernanke will get some very tough questions at his confirmation hearing, but sources say it's likely he will be confirmed -- because at uncertain economic times like these, most senators believe, stability counts.

On Wall Street, though investors were pleased by better-than-expected readings on consumers and housing, trading was choppy as it has been over the past week. Despite improving economic data, the market is still generally cautious.

After a 52 percent climb in the S&P 500 since early March, investors are questioning how much further stocks have to go, especially in the absence of data showing actual growth in the economy.

Stocks rose after the Conference Board said its Consumer Confidence index rose to 54.1 this month from an upwardly revised 47.4 in July. That was far above the 47.5 reading analysts expected. Still, the report is a long way from showing that consumers are actually feeling optimistic about the economy amid ongoing worries about job losses. But it suggests Americans' pessimism about the economy is abating.

Meanwhile, the Standard & Poor's/Case-Shiller U.S. National Home Price Index rose 1.4 percent in the second quarter from the January-March period, the first quarterly increase in three years. Home prices, while still down almost 15 percent from last year, are at levels last seen in early 2003.