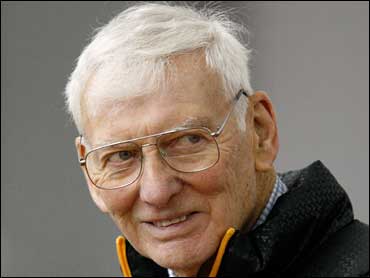 (AP)
It's a happy St. Patrick's Day for Dan Rooney: President Obama today announced that he is tapping the Pittsburgh Steelers owner to become the next U.S. ambassador to Ireland.

Rooney, a longtime Republican, endorsed and campaigned for then-candidate Obama in his key state of Pennsylvania during the primary campaign. In a statement announcing that he will nominate Rooney, the president lauded the 76-year-old as "an unwavering supporter of Irish peace, culture, and education."

Mr. Obama will discuss his choice of Rooney at today's Shamrock Ceremony at the White House, where he will be joined by the Taoiseach of Ireland, Brian Cowen. (Cowen, as Taoiseach, is head of the Irish government.) The event is set for 11:35 a.m. ET.

Rooney's father founded the Steelers in 1933, and Rooney took the team over in 1975. He chaired the panel that developed the so-called "Rooney Rule," which requires that NFL teams interview at least one minority when considering head coaches.

Most recently, of course, Rooney's Steelers won the Super Bowl.

"I am honored and grateful that such a dedicated and accomplished individual has agreed to serve as the representative of the United States to the Irish people," the president said.

UPDATE, 11:41: At the Shamrock Ceremony, the president said Rooney "will be an outstanding representative."

"Dan is a great friend, he and his family are as gracious and thoughtful a group of people that I know, so I know he is just going to do an outstanding job," he added.

Cowen, the Irish leader, added that he "very much welcome[d] his appointment."

UPDATE, 1:52: A foreign service group is opposing the nomination because it wants to end "the decades-old spoils system under which political activists are tapped for critical national security positions for which they are unqualified." Read more here>.