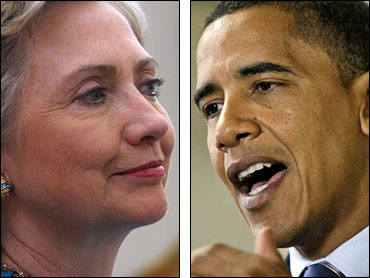 Barack Obama announced that he will help pay off Hillary Rodham Clinton's more than $20 million debt, personally writing a check in a gesture meant to win over her top financial backers.

Obama met with more than 200 of Clinton's biggest fundraisers Thursday at Washington's Mayflower Hotel, the first step in a two-day push to bring her supporters onboard his general election campaign. Behind the scenes, the two sides were negotiating her future involvement with the campaign.

Some Clinton donors had been frustrated that the Democratic presidential nominee-in-waiting had not done more to help her pay the bills even as they are expected to help fund his campaign.

Obama received a standing ovation from the crowd of more than 200 when he said he would enlist his supporters to help pay off her debt.

"I'm going to need Hillary by my side campaigning during his election, and I'm going to need all of you," Obama said, according to a report written by the only reporter allowed into the event and shared with other reporters afterward. He recounted how he had told his top fundraisers this week "to get out their checkbooks and start working to make sure Senator Clinton - the debt that's out there needs to be taken care of."

In a symbolic gesture, Obama delivered a personal check for $4,600, for himself and his wife, Michelle. The maximum individual donation allowed by law is $2,300.

Obama finance chair Penny Pritzker also wrote a $4,600 check for herself and her husband. Clinton campaign chairman Terry McAuliffe had it in his pocket and showed it to reporters waiting outside.

Clinton's debt includes $12 million of her own money. She has said she is not asking for help paying that back.

She told her donors they must make electing Obama a priority, as she acknowledged that hard feelings remain on both sides.

"But we are a family, and we have an opportunity now to really demonstrate clearly we do know what's at stake, and we will do whatever it takes to try to win back this White House," Clinton said.

Obama asked the donors for their support, but recognized their hearts may remain with her. But he added, "Senator Clinton and I at our core agree deeply that this country needs to change."

Clinton and Obama plan to appear together publicly for the first time since the end of the primary on Friday in symbolic Unity, New Hampshire - where each got 107 votes in the state's January primary. Clinton won New Hampshire in an upset that set the stage for their long campaign, and it is now a critical battleground for the general election.

Obama told reporters Wednesday that he thinks she'll be extraordinarily effective in speaking for his candidacy and he'd like her to campaign for him as much as she can. "I think we can send Senator Clinton anywhere and she'll be effective," Obama said.

But the extent of her travel for Obama is unclear. Obama campaign manager David Plouffe said Wednesday that they have not scheduled any events after New Hampshire. "We don't have any specific knowledge of her schedule past Friday," Plouffe said.

There's also the issue of former president Bill Clinton, reports CBS News correspondent Dean Reynolds. Aides say he remains bitter about his wife's defeat and the Obama campaign's suggestion that he played dirty during the primaries. Mr. Clinton issued a brief -- and exceedingly restrained -- paper statement this week about being committed to "doing whatever he can and is asked to do to ensure Senator Obama is the next president of the United States."

An Associated Press-Yahoo News poll out Thursday shows Obama has won over slightly more than half of Clinton's former supporters. About a quarter of Clinton's backers say they will support Republican John McCain over Obama.

Obama ended Thursday's meeting by taking a few questions from the group, according to attendees. But he sidestepped a question about whether she would join him on the ticket as his running mate.