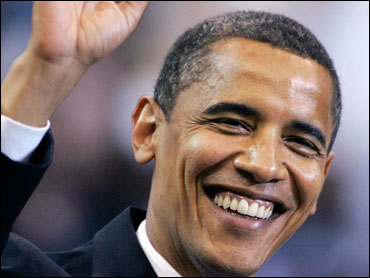 Barack Obama's 1.5 million donors were a financial spigot that was just too rich to shut down.

The Democratic presidential candidate on Thursday became the first presidential candidate from a major party to bypass public funds for the general election since the Watergate era. In so doing, he abandoned his once-stated desire to compete within a system designed to reduce the influence of money in politics.

"This decision could give Obama a huge financial advantage in the general election," said CBSNews.com senior political editor Vaughn Ververs. "By opting out of public financing, he can tap his vast network of small donors who have already given his campaign nearly $300 million. He may be criticized for bypassing a system he has previously voiced support for, but with the amount of money he can potentially raise, it's a price worth paying for his campaign."

His Republican rival, John McCain, said he would accept the public money for the fall campaign — $85 million available from early September until Election Day — and declared that Obama had broken his word. Obama, who has shattered fundraising records during the primary, is likely to raise far more than the taxpayer-financed presidential fund can supply.

McCain campaign communications director Jill Hazelbaker called Obama a "typical politician who will do and say whatever is most expedient."

"The true test of a candidate for president is whether he will stand on principle and keep his word to the American people," Hazelbaker said in a statement. "Barack Obama has failed that test today, and his reversal of his promise to participate in the public finance system undermines his call for a new type of politics."

Obama promptly showed off his financial muscle Thursday with his first commercial of the general election campaign. The ad, a 60-second biographical spot, will begin airing Friday in 18 states, including historically Republican strongholds.

The Illinois senator has called for public financing of campaigns in the past, but while his new decision opens him to charges of hypocrisy, his campaign advisers understand that issues of campaign finance do not rank high in most voters' minds.

Obama has proven himself to be a prodigious fundraiser who could easily raise more than the public fund supplies. And while he and his advisers know McCain and other Republicans will criticize his decision, they understand that issues of campaign finance do not rank high in most voters' minds.

By releasing his first ad of the general election, Obama also diluted the impact of the money story with a strong visual that was likely to dominate the day's television coverage of the campaign. Obama will draw attention to his finances again on Friday, when his campaign files its May fundraising report with the Federal Election Commission.

His decision represents a significant milestone in the financing of presidential campaigns. President Bush was the first candidate to reject public financing of primaries when he ran in 2000. But no candidate has ignored the general election funds since the law setting up the presidential finance system was approved in 1976.

"It's not an easy decision, and especially because I support a robust system of public financing of elections," Obama told supporters in a video message Thursday. "But the public financing of presidential elections as it exists today is broken, and we face opponents who've become masters at gaming this broken system."

Obama, said McCain, "said he would stick to his word. He didn't."

"This election is about a lot of things. It's also about trust," McCain said. "It's about keeping your word."

Last year, Obama filled out a questionnaire where he vowed to "aggressively pursue an agreement with the Republican nominee to preserve a publicly financed general election." But since clinching the Democratic nomination earlier this month, Obama has not broached the subject with McCain. The only discussion occurred about two weeks ago between Obama's and McCain's lawyers.

Obama lawyer Robert Bauer said he discussed the public financing issue for 45 minutes on June 6 with McCain counsel Trevor Potter. In interviews and e-mails, both Bauer and Potter agree that Bauer raised concerns about McCain having a head start because he had secured the nomination in early March and Obama did not until June 3. Potter said he told Bauer that given Obama's fundraising "I was sure there would be no McCain advantage by the end of the summer."

That meeting, Potter said, "was not part of any negotiation" on public financing.

At a breakfast with reporters Thursday, Bauer said that after his meeting with Potter, "It became clear to me, and I reported to the campaign, that there really wasn't a basis for further discussion."

Obama has shattered presidential campaign fundraising records, raking in more than $265 million as of the end of April. Of that, nearly $10 million was for the general election, reserved for spending after the party's national convention in August. McCain had raised nearly $115 million by the end of May, eligible for spending before the convention.

On the other hand, Obama's clear financial advantage over McCain is offset in part by the resources of the Republican National Committee, which has far more money in the bank than the Democratic National Committee. Both national parties can spend money on behalf of the presidential candidates.

Obama said McCain and the Republican National Committee are fueled by contributions from Washington lobbyists and political action committees.

"And we've already seen that he's not going to stop the smears and attacks from his allies running so-called 527 groups, who will spend millions and millions of dollars in unlimited donations," Obama said.

Despite that claim, few Republican-leaning groups have weighed into the presidential contest so far. In fact, Obama allies such as MoveOn.org are the ones have been spending money on advertising against McCain.

McCain and Obama both declined public financing in the primary contests, thus avoiding the spending limits that come attached to the money. McCain had initially applied for the money, however, and has been in a dispute with the Federal Election Commission over whether he needed commission approval to decline the primary election funds. The FEC insists that he does, but has not had a quorum to act because four of its six seats have been vacant pending Senate confirmation of presidential nominees. McCain lawyers have disputed the need for FEC approval.