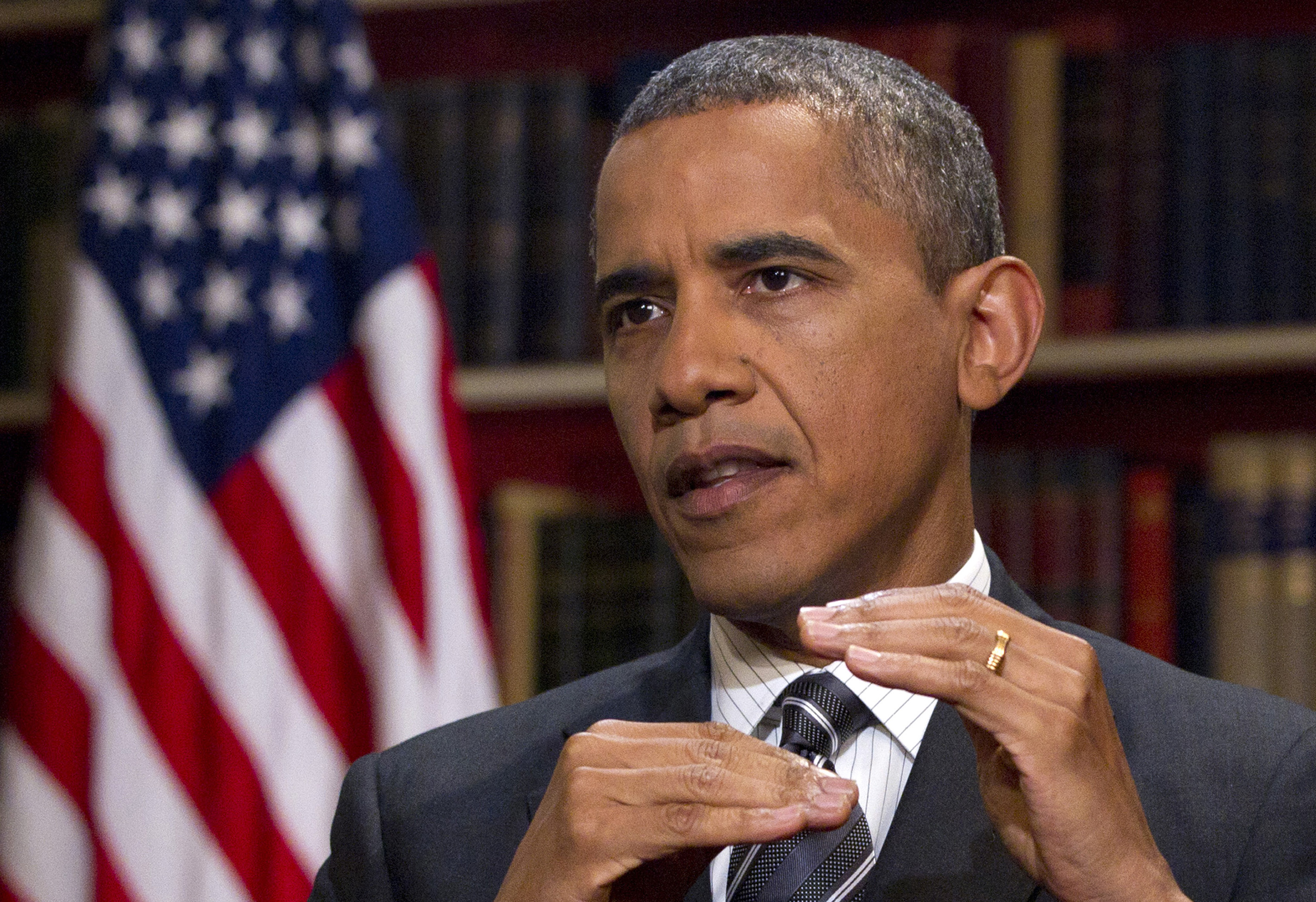 (AP) President Barack Obama said Mitt Romney has locked himself into "extreme positions" on economic and social issues and would surely impose them if elected, trying to discredit his Republican rival at the biggest political moment of his life.

In an interview with The Associated Press, Mr. Obama said Romney lacks serious ideas, refuses to "own up" to the responsibilities of what it takes to be president, and deals in factually dishonest arguments that could soon haunt him in face-to-face debates.

Mr. Obama also offered a glimpse of how he would govern in a second term of divided government, insisting rosily that the forces of the election would help break Washington's stalemate. He said he would be willing to make a range of compromises with Republicans, confident there are some who would rather make deals than remain part of "one of the least productive Congresses in American history."

Mainly, Mr. Obama appeared intent on countering Romney ahead of the convention. In doing so, the president depicted his opponent as having accumulated ideas far outside the mainstream with no room to turn back.

"I can't speak to Governor Romney's motivations," President Obama said. "What I can say is that he has signed up for positions, extreme positions, that are very consistent with positions that a number of House Republicans have taken. And whether he actually believes in those or not, I have no doubt that he would carry forward some of the things that he's talked about."

President Obama spoke to the AP on Thursday before heading off to a long weekend with his family at Camp David, the secluded presidential retreat in the Maryland mountains.

The president was at ease but doggedly on script, steering even personal-themed questions about Romney and running mate Paul Ryan into answers about starkly different visions for helping the middle class.

Romney, a successful former executive of a private equity firm and one-time Massachusetts governor, will introduce himself to a TV audience of millions next Thursday as he takes the convention stage to accept his party's presidential nomination. He has offered himself as a business-minded alternative to Obama and has seized on voter concerns about joblessness and the direction of the nation.

Nearly ten weeks before Election Day, the race is remarkably stable and reflective of a sharply divided nation, with registered voters about evenly split on their choice and nearly a quarter of them unsure or still willing to change their mind. Across the interview, President Obama's messages often seemed directed at moderate and independent voters whose sway could make the difference.

Mr. Obama's depiction of a Romney presidency grew most pointed when he was asked if his Republican challenger has no core, as one of the president's top advisers once put it.

The president suggested that whatever Romney really stands for in life is secondary to the promises Romney has made in the campaign.

In explaining his accusation of "extreme" positions, the president cited Romney's call for across-the-board tax cuts that Mr. Obama said would mostly help the rich at the expense of everyone else and cost the nation $5 trillion. President Obama singled out Romney's opposition to tax credits for producers of wind energy, the kind of issue that carries large political resonance in a battleground state such as Iowa.

And Mr. Obama alluded to the provocative issue of abortion, suddenly thrust to the fore this week when Republican Missouri Senate candidate Todd Akin said the female body has a way to "shut that whole thing down" when a woman is the victim of "legitimate rape."

The Republican platform in Tampa calls for a ban on abortion with no specific exceptions for rape or other circumstances. Mr. Obama predicted that a President Romney would not "stand in the way" if Congress gave him a bill that stripped away women's control over their reproductive health.

Romney is on record, however, as not opposing abortion in cases of rape and incest or if it will save the mother's life.

Polling shows social issues such as abortion represent perhaps President Obama's best opportunity to draw support from Romney. Mr. Obama already holds a broad lead as the candidate more trusted to handle those social issues among Democrats and independents. The issue is one of Romney's biggest vulnerabilities among moderate and liberal Republicans.

Mr. Obama also sought to chip away at Romney's trustworthiness, taking fresh shots at Romney's refusal to release years of tax returns for public inspection. He said that position was indicative of a candidate who has a "lack of willingness to take responsibility for what this job entails."

Yet it is the economy that has driven this election and has dominated President Obama's message of a middle-class revival.

"We aren't where we need to be. Everybody agrees with that," said President Obama, who inherited an economy in free fall and now bears responsibility for a recovery that remains weak. "But Governor Romney's policies would make things worse for middle-class families and offer no prospect for long-term opportunity for those striving to get into the middle class," the president said.

President Obama holds a decisive advantage over Romney when Americans are asked who better understands their daily woes. Yet nearly two-thirds of people in a new AP-GfK poll say the economy is in poor shape, and 60 percent say the country is headed in the wrong direction.

President Obama expressed confidence that even voters whose lives have not improved during his term will stick with him as they assess the two candidates.

"If they saw Gov. Romney offering serious proposals that offered some sort of concrete ways in which middle-class families would be helped, then I could understand them thinking about that choice," Obama said. "But that's not what's happening."

And therein lies the central case that Mr. Obama made in the interview, as he has made for months, and as he will again at his own party's convention in Charlotte, N.C., in early September.

The moment that could finally shake up a close race could come in the three debates Obama and Romney hold in October. The president said Romney could run into trouble because of arguments that are not backed up by facts, citing a widely debunked television ad campaign in which Romney accuses Obama of gutting the work requirement in the federal welfare law.

"It will be a little tougher to defend face-to-face," President Obama said.

Mr. Obama's view of a different second-term dynamic in Washington, even if both and House Republicans retain power, seems a stretch given the gridlocked politics of a divided government. He said two changes — the facts that "the American people will have voted," and that Republicans will no longer need to be focused on beating him — could lead to better conditions for deal-making.

If Republicans are willing, President Obama said, "I'm prepared to make a whole range of compromises" that could even rankle his own party. But he did not get specific.

The 25-minute interview, conducted in the library of the White House residence, was part of a multi-faceted campaign by Obama's team to snag some of the spotlight during Romney's big week. President Obama denied the notion, widely if quietly held in political circles, that the fiercely competitive president is also driven to beat Romney because he does not hold him in high regard.

"I don't really know him well," Mr. Obama said. "The big arguments that I have with Governor Romney have to do with where we take this country forward."