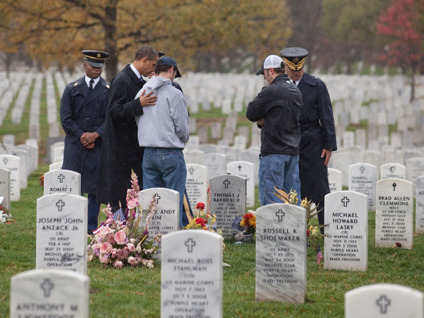 Some conservative talk show hosts and pundits have mounted an effort to politicize Memorial Day by questioning President Obama's plan to visit a national cemetery in Illinois instead of attending the annual ceremony at Arlington.

RedState blogger and CNN contributor Erick Erickson tweeted, "Obama skipping the Tomb of the Unknowns this weekend for Chicago is offensive."

Radio and TV talker Glenn Beck (on May 25) said, "Obama is skipping out on a Memorial Day ceremony at Arlington Cemetery because he'll be in Chicago on vacation." On his show, Beck incorrectly asserted that the president "has decided not to honor our troops on Memorial Day."

Beck said, "Maybe this has happened before. I don't recall it."

Let's set the record straight. Mr. Obama will participate today in a ceremony at Abraham Lincoln National Cemetery in Elwood, Illinois, about 50 miles south of Chicago. He is not the first president to be away from Washington on a patriotic holiday.

The critics were either ignorant of the facts or they failed to mention the 2007 Veterans Day ceremony when Vice President Dick Cheney spoke while President George W. Bush observed the holiday in Texas.

Vice President Dan Quayle laid the wreath at Arlington on Memorial Day, 1992. I recall covering President George H.W. Bush, a distinguished World War II vet, as he marked the holiday that year at his favorite vacation spot, Kennebunkport, Maine, where he spoke to a veterans group.

Back in 1983, a Defense Department official laid the Memorial Day wreath at Arlington when Ronald Reagan was at a G-7 Summit meeting in Williamsburg, Virginia.

This is far from a complete list, but presidents have been at places other than Arlington on Memorial Day.

Some of Mr. Obama's conservative critics have also used his Memorial Day plan to question his commitment to the military.

Like his predecessors, Mr. Obama has expressed deep feelings about the troops in both words and deeds, often with as little fanfare as the presidency allows. Like other presidents, he meets privately with the families of the fallen. He watches developments in the buildup in Afghanistan and the planned drawdown in Iraq.

Unlike other presidents, he paid a middle of the night somber visit to Dover Air Force Base in Delaware to witness the return of dead soldiers.

Perhaps the most eloquent statement on Mr. Obama's stand on the military comes from Gold Star Mother Carol Barbieri of Maryland. Her son, Army Specialist and paratrooper Thomas "TJ" Barbieri, was killed in Iraq in 2006.

TJ's brothers Stephen and Matthew were visiting his grave at Arlington on Veterans Day last year when Mr. Obama stopped to pay his respects. He asked about their loved one and expressed his appreciation for the sacrifice.

Responding to e-mailed questions last week, Mrs. Barbieri told me the family was grateful that the president "took the time to honor the memory and sacrifice of TJ, along with those of all of the others laid to rest alongside our son."

She noted it was apparently the first time that any president visited the graves in Arlington's Section 60, the burial place of many troops killed in Iraq and Afghanistan.

Asked about the president's decision to visit the Illinois cemetery on Memorial Day, Mrs. Barbieri said she and her husband Tom "both feel that there is no exclusivity for bravery and valor."

She noted, "Our heroes are interred all over the nation. The President of the United States should be remembering and honoring the men and women who have fought for this country. It doesn't matter where he does that as long as he never forgets them."

Poignant words to ponder for people on all points of the political spectrum, especially on this Memorial Day, 2010.