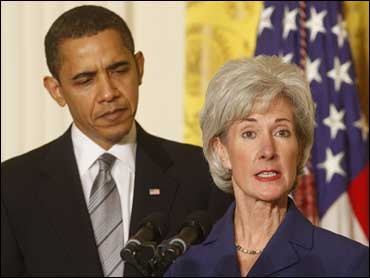 If confirmed, Sebelius, 60, will be in charge of a budget of more than $730 billion and help lead President Obama's efforts to reform the health care system.

In introducing Sebelius today, the president said that efforts at health care reform face long odds, noting that "there are those who simply don't believe Washington can bring about this change."

Still, he said, "the path that we are on is unsustainable."

"I don't think anybody has a silver bullet when it comes to health care," he said. "There are some difficult tradeoffs to be made, there are difficult choices to be made."

(AP Photo/Charlie Riedel)
The Kansas governor, he said, has a "deep knowledge of what the burden of crushing costs does to our families and businesses."

Mr. Obama lamented the rapid growth of health care premiums over the last eight years, calling it "one of the fastest growing expenses in the federal budget."

Sebelius, in turn, said "we can't fix the economy without fixing health care." She called the opportunity to run HHS "a responsibility I could not refuse."

As HHS Secretary, Sebelius would oversee the Food and Drug Administration, the Centers For Disease Control and Prevention, and the National Institutes Of Health. The president said that in his administration those agencies would be run by those who "push politics aside in favor of proven science."

The president also announced today that he is nominating Nancy-Ann DeParle, commissioner of the Department of Human Services in Tennessee, as the director of the White House Office for Health Reform.

DeParle, whom the president called "one of the nation's leading experts on health care and regulatory issues," worked in the Clinton White House on budget matters for federal health care programs.

The Democratic governor of a red state, Sebelius has had mixed results in trying to reform health care in her home state. She "tried twice to raise Kansas's cigarette tax to expand medical coverage," as the Washington Post reports. "Both times she was thwarted by Republican legislators, who objected to the tax increases and wanted a more market-based solution."

The New York Times called that loss "the greatest frustration" of her six years as governor. If confirmed, the newspaper noted, Sebelius will have the advantage of working primarily with Democrats, not Republicans, and will be "the point person for what may become the largest expansion of taxpayer-subsidized health insurance in more than four decades."

The White House also announced today that it was releasing $155 million in stimulus package money for 126 new health centers.

"These health centers will help people in need – many with no health insurance – obtain access to comprehensive primary and preventive health care services," the White House said.