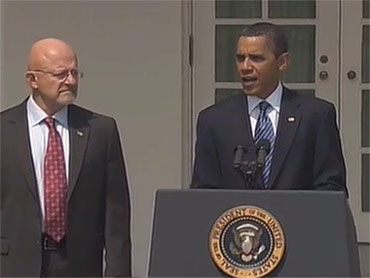 Mr. Obama's choice for national intelligence director is James Clapper, a retired three-star Air Force general. The president made the announcement at the White House on Saturday.

Clapper, who needs Senate approval before he can take the job, would succeed retired Adm. Dennis Blair. Blair resigned last month after frequent clashes with the White House.

The move comes despite objections by some lawmakers in both parties, who complain Clapper had been combative and sometimes obstructive under questioning on Capitol Hill in his previous intelligence roles.

The position of national intelligence director was created in 2004 to coordinate the 16 intelligence agencies in an effort to address the intelligence failures that led to the Sept. 11, 2001, terrorist attacks.

He has won many fans in the military community and is known for his blunt, sometimes salty speech and direct manner.

But that manner has made for critics on Capitol Hill.

Rep. Pete Hoekstra, a Michigan Republican, said Clapper was the wrong choice, because, he said, he showed disdain for Congress and the oversight process.

Hoekstra and other lawmakers also questioned whether the retired general would fare any better than his predecessor Blair in clashes with the CIA's Panetta - an administration insider and former lawmaker himself, with a reputation for knowing how to work the system.

Sen. Kit Bond, the top Republican on the Senate Intelligence Committee, said that by choosing Clapper, Obama "has ensured our terror-fighting strategy will continue to be run out of the Department of Justice and White House."

The Intelligence Committee's chairwoman, Sen. Dianne Feinstein, a Democrat from California, objected to the Clapper choice last week, saying she wanted a civilian in the role.

Sen. Joe Lieberman, an independent from Connecticut, applauded the choice, however, while at the same time suggesting the DNI role itself may be flawed - by giving the director responsibility over the intelligence agencies but no direct authority to change what those agencies do.