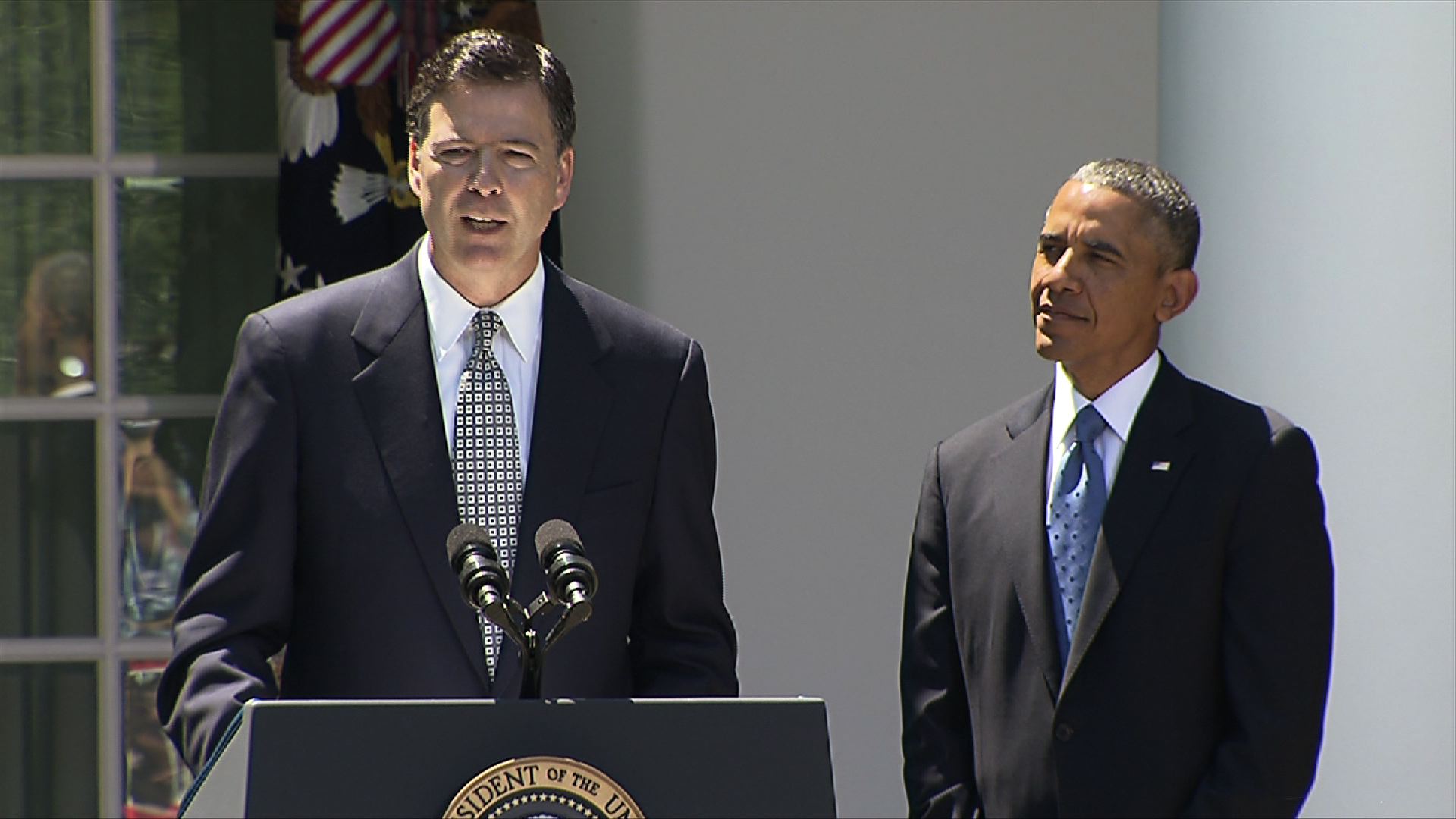 Lauding him as "a man who stands very tall for justice and rule of law," President Obama on Friday officially nominated the six-foot-eight James Comey to be the next director of the FBI.

Comey, 52, who served as deputy attorney general under former President George W. Bush from 2003 to 2005, will replace current director Robert Mueller, who is stepping down in September. The president said of Mueller in his announcement at the White House: "I'll say it as clearly as I can: countless Americans are alive today and our country is more secure because of the FBI's outstanding work under the leadership of Bob Mueller."

As the administration battles complaints of overreach amid leaked government surveillance programs, Mr. Obama commended Comey's ability to balance national security and citizens' constitutional right to privacy: "As we've seen in recent days," he said, "this work of striking a balance between our security but also making sure we are maintaining fidelity to those values that we cherish is a constant mission."

During his time at the Bush Justice Department, Comey earned plaudits from opponents of the Bush administration's warrantless wiretapping program by initially refusing to reauthorize it. When he and Mueller threatened to resign as a result of the program, Bush revised it.

Comey is admired by both Republicans and Democrats, CBS News' Stephanie Lambidakis reports, especially because of his riveting testimony about the wiretapping struggle, which included a dramatic scene at the hospital bed of then-Attorney General John Ashcroft, who also refused to sign-off on renewing the surveillance program.

Comey told a Senate panel that upon hearing the news that Ashcroft had declined to approve the program, Bush White House counsel Alberto Gonzales and chief of staff Andy Card headed to Ashcroft's sick bed in the intensive care unit at George Washington University Hospital. When Gonzales begged Ashcroft to sign off, the sick attorney general again detailed his problems with the program and pointed out that Comey, his deputy, currently held the powers of the attorney general while he was incapacitated.

Watching the struggle in the hospital room unfold, "I was angry," Comey explained to the panel. "I thought I had just witnessed an effort to take advantage of a very sick man who did not have the powers of the attorney general." A day after the confrontation, after he was threatened with the resignations of Comey and Mueller, Bush ordered revisions to the program in accommodation of the officials' concerns.

Mr. Obama on Friday did not directly mention the 2004 episode, but called Comey a man of "fierce independence and deep integrity," who "was prepared to give up a job he loved rather than be part of something he felt was fundamentally wrong."

After his stint in the Bush administration, Comey joined a Connecticut-based hedge fund, Bridgewater Associates, in 2010, where he remained until earlier in 2013, when he departed to become a lecturer at Columbia Law School. His time at the hedge fund has drawn fire from the top Republican on the Senate Judiciary Committee, Iowa Sen. Chuck Grassley.

"If he's nominated, he would have to answer questions about his recent work in the hedge fund industry," Grassley said last month after reports surfaced that Comey was Mr. Obama's choice to run the FBI. "The administration's efforts to criminally prosecute Wall Street for its part in the economic downturn have been abysmal, and his agency would have to help build the case against some of his colleagues."