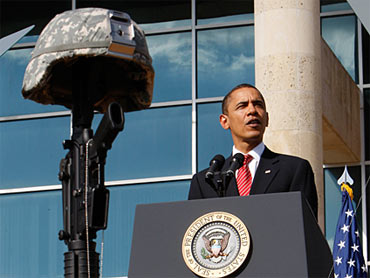 (AP Photo/Pablo Martinez Monsivais)
President Obama spoke at a memorial service for the men and women killed at the shooting rampage at Fort Hood Army post, honoring the dead and predicting justice for the shooter responsible for their murder.

"It may be hard to comprehend the twisted logic that led to this tragedy," Mr. Obama said. "But this much we do know – no faith justifies these murderous and craven acts; no just and loving God looks upon them with favor. For what he has done, we know that the killer will be met with justice – in this world, and the next."

The president said the fact that the shooting took place on American soil "makes the tragedy even more painful and even more incomprehensible." He said those who were killed will endure "through the life of our nation."

"Every evening that the sun sets on a tranquil town; every dawn that a flag is unfurled; every moment that an American enjoys life, liberty and the pursuit of happiness – that is their legacy," said the president.

Mr. Obama spoke individually about those who were killed in the shootings, offering background information and details about their lives. When Staff Sergeant Amy Krueger's mother told Krueger she couldn't take Osama bin Laden on by herself, the president noted, "Amy replied: 'Watch me.'"

"Their lives speak to the strength, the dignity the decency of those who serve, and that's how they will be remembered," Mr. Obama said of the fallen.

Watch CBS News Videos Online
He went on to say "this generation has more than proved itself the equal of those who have come before," noting their service in a time of danger.

"We need not look to the past for greatness, because it is before our very eyes," he said.

The president said America's commitment to justice "is so enduring" that the shooter will be given due process, "just as surely as we will see that he pays for his crimes."

"We are a nation that guarantees the freedom to worship as one chooses," he said. "And instead of claiming God for our side, we remember Lincoln's words, and always pray to be on the side of God."

"We say goodbye to those who now belong to eternity," concluded the president. "We press ahead in pursuit of the peace that guided their service. May God bless the memory of those that we have lost. And may God bless the United States of America."