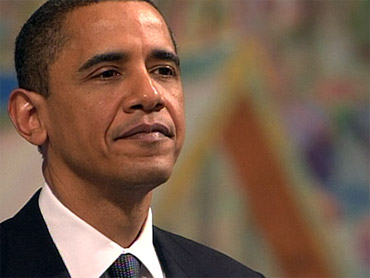 President Barack Obama says he has no intention of sending American troops to Yemen or Somalia.

Mr. Obama told People magazine in an interview to be published Friday that he still believes the center of al Qaeda activity is along the border between Afghanistan and Pakistan.

"I never rule out any possibility in a world that is this complex," Mr. Obama said. However, he said, "in countries like Yemen, in countries like Somalia, I think working with international partners is most effective at this point."

Terrorism concerns are rising in Yemen, at the bottom of the Arabian Peninsula, and in Somalia, critically located along key global shipping routes to Mideast oil fields.

"I have no intention of sending U.S. boots on the ground in these regions," President Obama said.

People magazine on Sunday released a transcript of the interview conducted last Friday.

Meanwhile, Yemen's president said he is ready to open a dialogue with al Qaeda fighters who lay down their weapons and renounce violence, despite U.S. pressure to crack down on the terror group.

The United States has complained in the past that Yemen struck deals with al Qaeda fighters and freed them from prison after they promised not to engage in terrorism. Some later broke those promises and are now believed to be active in al Qaeda's offshoot in Yemen.

President Ali Abdullah Saleh vowed that his government is "determined to stand up to the challenges" of al Qaeda and that his security forces will track down as many al Qaeda fighters as possible among those who refuse to stop violence.