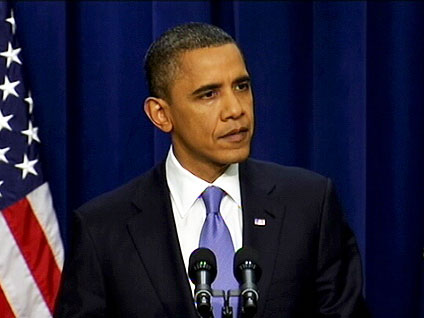 President Obama and Democrats managed to pull off an unusually successful lame-duck congressional session, but a number of the president's goals still fell by the wayside, among them energy and climate change legislation, collective bargaining for firefighters and safety workers and closing the prison at Guantanamo Bay.

That's not all: At a press conference today, Mr. Obama said "maybe my biggest disappointment" was not passing the DREAM Act, an immigration measure to give upstanding undocumented immigrants who were brought to America as children a pathway to citizenship.

Even though advocates of the measure suspect it has virtually no chance of revival under a Republican-controlled House, Mr. Obama insisted he's not ready to give up on it. If there's anything people should have learned during the lame duck session, he said, it's that "I am persistent. If I believe in something strongly, I stay on it. And I believe strongly on this."

The DREAM Act would have created a pathway to citizenship for young people who entered the United States before age 16, had a high school degree or the equivalent, had no serious criminal record, and met other criteria, including agreeing to complete two years of college or military service. The measure has had varying levels of bipartisan support, but Republicans in the Senate managed to kill the bill with a filibuster this month.

The bill was perceived as Democrats' last shot at fulfilling their promise to Hispanic voters to act on immigration reform, something they had promised to do this year.

The president said he would continue to engage with Republicans on the issue. "Some of them in their heart of hearts know it's the right thing to do," he said of the DREAM Act. The president said politics have gotten in the way.

"That may mean we have to change the politics," Mr. Obama said.

The president said he would spend more time engaging with the American people on the issue so the DREAM Act could win stronger public support -- and thus more Republican votes. He spoke of the letters he receives from young people who simply want to stay in the United States as productive members of society.

"They're dreaming about college, suddenly they come to 18, 19 years old, and they realize, 'even though I feel American, I am an American, the law doesn't recognize me as an American. I want to go college to better myself, and I'm at risk of deportation," Mr. Obama said. "And it's heartbreaking."

He continued, "That can't be who we are...I think if the American people knew any of these kids -- they probably do, they just may not know their status-- they'd say, 'of course we want you.'"

Republicans have repeatedly said that the U.S.-Mexican border must be entirely secure before any conversation about immigration reform can move forward. The president said in his press conference that his administration has done more on border security than other administration in recent years but allowed, "If they've got ideas for more on border security, I'm happy to have that conversation."

More on the DREAM Act:

Obama: "We are Not Doomed to Endless Gridlock"Obama Stands by Opposition to Gay Marriage - but Feelings "Evolving"