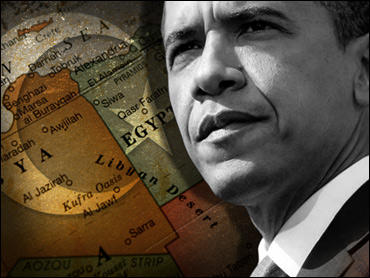 President Obama sat down with Bill O'Reilly of FOX News for an interview Sunday and discussed many things, from the Egyptian uprising to the Super Bowl to the constitutionality of the health care law that Mr. Obama passed last year.

Regarding Egypt and President Hosni Mubarak, Mr. Obama said, "The United States and Egypt have been a partner for a long time. [Mubarak's] been a good partner when it comes to the peace with Israel. Counterterrorism effects that he's supported. We have said publicly and privately that trying to suppress your own people is not sustainable. When you resort to suppression and violence, it does not work."

When O'Reilly asked Mr. Obama about the presence of the Muslim Brotherhood and whether the group is a threat, Mr. Obama said, "I think they're one faction in Egypt. They don't have majority support in Egypt. But they're well organized. There are strains of their ideology that are anti-U.S. There's no doubt about it."

Mr. Obama went on to say that there are many secular people in Egypt, along with many educators and a civil society that wants a representative government.

The Brotherhood aims to create an Islamic state in Egypt, but insists that it would not force women to cover up in public in line with Islam's teachings and would not rescind Egypt's 1979 peace treaty with Israel.

Mr. Obama said he could not predict when Mubarak would leave office.

On health care, Mr. Obama said a federal judge in Florida who recently struck down the entire law "was wrong." That judge said the requirement that nearly everyone have health insurance is unconstitutional. A different judge who reached the same conclusion in a separate case voided only that requirement. Judges in two other cases upheld the law.

It's generally accepted that the U.S. Supreme Court will have the final word. Obama gave an indirect answer to O'Reilly's question about whether he's prepared for the law to "go down." Obama said only that he doesn't want to spend the next two years "refighting the battles of the last two years."

In another line of questioning, Mr. Obama says he doesn't take it personally when people say they hate him. And the thing he dislikes most about being president is the constant, intense scrutiny.

"The people who dislike you don't know you. The folks who hate you, they don't know you," Obama said Sunday in an interview broadcast during Fox's pre-game coverage of the Super Bowl. "What they hate is whatever funhouse mirror image of you that's out there. They don't know you."

Asked whether his critics annoyed him, Mr. Obama said: "By the time you get here, you have to have had a pretty thick skin. If you didn't, then you probably wouldn't have gotten here."

Obama lamented anew about "being in the bubble." He is followed practically everywhere by staff, Secret Service agents and the media.

"It's very hard to escape," said Mr. Obama, seated in the Blue Room of the White House. "Every move you make. And over time, you know, what happens is is that you feel like you're not able to just have a spontaneous conversation with folks. And that's a loss. That's a big loss."

Asked what surprised him after he took office, Mr. Obama said it's that he's never asked to solve an easy problem.

"I think that the thing you understand intellectually but that you don't understand in your gut until you're in the job is that every decision that comes to my desk is something that nobody else has been able to solve," he said. "The easy stuff gets solved somewhere by somebody else. By the time it gets to me, you don't have easy answers."

Mr. Obama said he has to use his best judgment knowing that "you don't have perfect information and you know that you're not going to have a perfect solution."

A liberal, Mr. Obama denied that he's begun a shift to the political middle following the "shellacking" Democrats suffered in the November elections - the party lost control of the House and has a slimmer majority in the Senate - and as he lays the groundwork for an expected campaign for re-election in 2012.

"I'm the same guy," Mr. Obama said. "And my practical focus, my common-sense focus is how do we out-innovate, out-educate, out-build and out-compete the rest of the world? How do we create jobs here in the United States of America? How do we make sure that businesses are thriving, but how do we also make sure ordinary Americans can live out the American dream because right now they don't feel like they are?"

O'Reilly asked Mr. Obama three times whether the job had changed him before he acknowledged that it had. Obama said his hair is grayer and that "I'm basically the same guy as when I came in" to office. O'Reilly then said that some of Obama's friends have said Obama is not as light or spontaneous as he once was, to which Obama agreed.

On a lighter note during the FOX News interview, O'Reilly asked Mr. Obama if he planned to watch the Super Bowl, suggesting that it may not be as interesting to the President as basketball.

"I know football. I will watch the game," said Mr. Obama. "I schmooze, give everybody a little bit of time. Once the game starts, we're watching the game. We have to focus on football."

As for the game, Mr. Obama declined to choose between the Pittsburgh Steelers and the Green Bay Packers.

"Here's the thing, once my [Chicago] Bears lost, I don't pick sides," he said. Green Bay defeated the Bears to get to the Super Bowl and eventually won the championship, defeating the Pittsburgh Steelers 31-25.