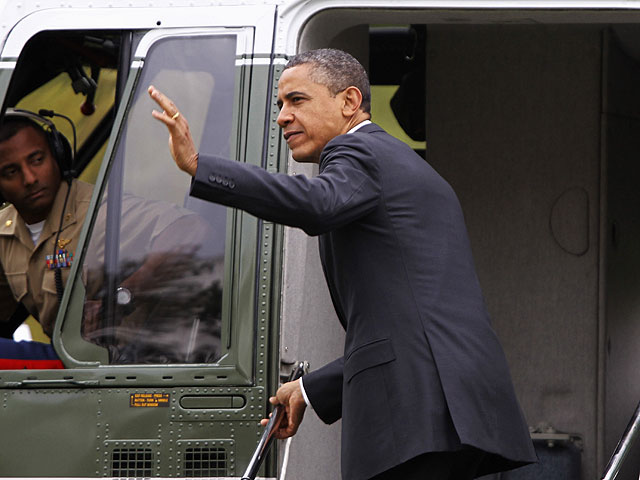 (AP) WASHINGTON - President Barack Obama is moving ahead with tough new sanctions aimed at squeezing Iran's oil exports after determining there is enough crude on world markets to take the step without harming U.S. allies.

Obama's move allows the U.S. to go forward with sanctions on foreign banks that continue to purchase oil from Iran. The sanctions aim to further isolate Iran's central bank, which processes nearly all of the Islamic Republic's oil purchases, from the global economy.

U.S. officials hope ratcheting up economic pressure will both push Iran to abandon its disputed nuclear program and convince Israel to give sanctions time to take hold before pursuing a military strike on Iran's nuclear facilities. The U.S. and allies believe that Iran is pursuing a nuclear bomb; Iran denies that.

Under a sweeping defense bill Obama signed at the end of December, he had until Friday to determine if there was enough oil supply on the world market to allow countries to cut their oil purchases from Iran.

Obama announced his decision in a statement Friday after a source initially confirmed the news to The Associated Press.

The president said he based his determination on global economic conditions, the level of spare oil capacity and increased production by some countries, among other factors. He said he would keep monitoring the global market closely to ensure it can handle a reduction of oil purchases from Iran.

With oil prices already rising this year amid rising tensions over the nuclear dispute between Iran and the west, U.S. officials have sought assurances that pushing countries to stop buying from Iran would not cause a further spike in prices.

That's particularly important for Obama in an election year that has seen an increasing focus on gas prices.

The congressionally mandated sanctions target foreign financial institutions that do business with Iran's central bank — barring them from operating in the U.S. to buy or sell Iranian oil. The penalties are to take effect at the end of June, around the same time Europe's embargo on Iranian oil kicks in.

Countries can still avoid the sanctions if they take steps to significantly reduce their imports before then.

Domestic and foreign policy concerns have complicated the administration's decision to pursue the oil sanctions.

Many of the countries that buy oil from Iran are U.S. allies, including several European Union nations, Japan, South Korea and India. In order to provide flexibility to countries friendly to the U.S., the sanctions bill allows the U.S. to grant waivers to nations that significantly reduce their purchases of Iranian oil.

Even before Friday's decision, the State Department announced that it would grant waivers to 10 European Union countries and Japan because of steps they have already taken to cut back on Iranian oil. An E.U. oil embargo, approved in January, is set to take effect in July.

"Today, we put on notice all nations that continue to import petroleum or petroleum products from Iran that they have three months to significantly reduce those purchases or risk the imposition of severe sanctions on their financial institutions," Menendez said in a statement.

He predicted most countries would cut their purchase of oil from Iran, either out of fear of sanctions, or a shared fear over the Iran's pursuit of nuclear weaponry.

The United States has not said what constitutes a significant reduction in Iranian oil purchases, and analysts believe the administration could use different metrics for different countries.

Administration officials say a February report from the Energy Information Administration shows there is excess oil supply on the global market. But the report also showed that prices are high.