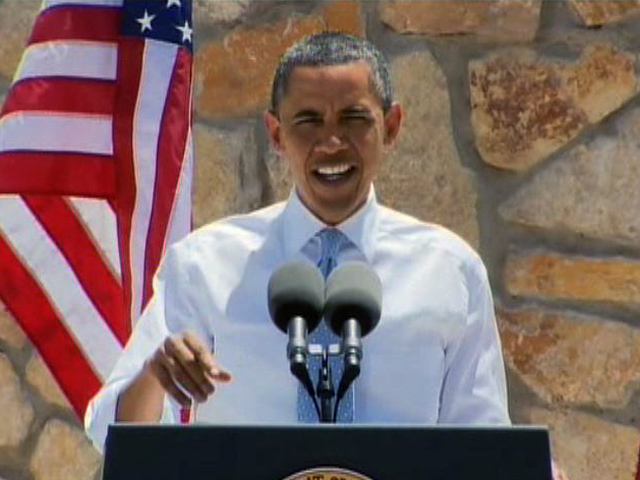 Delving anew into an explosive issue, President Barack Obama stood near the border with Mexico on Tuesday and declared it more secure than ever, trying to build pressure on Republicans to take on a comprehensive immigration overhaul -- and eagerly working to show vital Hispanic voters that he is not the one standing in the way.

Countering Republican calls to focus on border security before moving to a comprehensive overhaul, Obama said their demands have been more than met by his administration but "they'll never be satisfied."

On his first trip to the U.S.-Mexico border since becoming president, Obama boasted of increasing border patrol agents, nearing completion of a border fence, and screening more cargo.

"We have gone above and beyond what was requested by the very Republicans who said they supported broader reform as long as we got serious about enforcement," Obama said. "But even though we've answered these concerns, I gotta say I suspect there are still going to be some who are trying to move the goal posts on us one more time."

Trying to build public support for legislation congressional Republicans don't want to pass, Obama said: "The question is whether those in Congress who previously walked away in the name of enforcement are now ready to come back to the table and finish the work we've started."

Obama also tailored his argument to the times, making his case for immigration reform in newly sharpened economic terms. He argued that the middle class would benefit from bringing illegal immigrants out of an underground economy and drawing on the abilities of immigrants educated in American universities.

Republicans disputed Obama's contention that the border has been effectively secured and accused him of playing politics in pursuit of the ever-growing Hispanic electorate ahead of the 2012 election. With Republicans in control of the House there's no longer any appetite on Capitol Hill for the comprehensive legislation Obama wants that would offer a path to citizenship for the 11 million illegal immigrants in the country.

"The president's off talking about comprehensive reform. We've been down that road before," House Majority Leader Eric Cantor, R-Va., told reporters on Capitol Hill. "I believe, in turn, we should do things that actually produce some progress and results."

But instead of trying to make deals on Capitol Hill -- where even some Republicans who once supported a comprehensive overhaul have turned against it -- Obama is taking his argument to the country, using the singular megaphone of the presidency to try to build a groundswell of support for legislation.

"I am asking you to add your voices to this," Obama said in El Paso. "We need Washington to know that there is a movement for reform gathering strength from coast to coast. That's how we'll get this done."

The push comes as many Latino voters, believing that the president never made good on his campaign promise to tackle immigration laws in the first year of his presidency, want to see him do more. They want Obama not just to push legislation but to act unilaterally to slow some deportations, something he has refused to do.

At the same time, the strategy allows Obama to highlight that Republicans are the ones blocking an immigration bill -- shifting responsibility away from himself as his re-election campaign approaches.