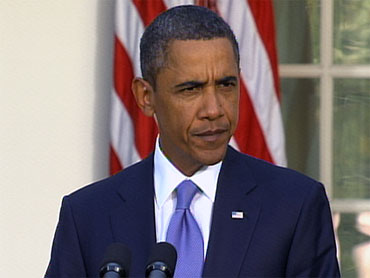 "This moment of opportunity may not soon come again," Obama said at the White House before hosting Israeli Prime Minister Benjamin Netanyahu and Palestinian President Mahmoud Abbas in the first face-to-face peace talks in nearly two years. "They cannot afford to let it slip away."

Obama sought to temper expectations, noting that it had taken his administration this long just to get the two sides back to the bargaining table.

"The hard work is only beginning," Obama said, with Secretary of State Hillary Rodham Clinton and special Middle East peace envoy George Mitchell at his side. "Neither success nor failure is inevitable. But this much we know: If we do not make the attempt, then failure is guaranteed. If both sides do not commit to these talks in earnest, then long-standing conflict will only continue to fester and consume another generation, and this we simply cannot allow."

In a carefully arranged series of talks designed to lay the final groundwork for formal negotiations, Obama met separately with Netanyahu and Abbas as well as with Jordan's King Abdullah II and Egyptian President Hosni Mubarak. Later they all gathered for dinner, a private prelude to Thursday's scheduled start of formal negotiations at the State Department.

In his Rose Garden remarks, Obama noted that many are skeptical, a view underlined by two days of Palestinian attacks on Israelis in the disputed West Bank.

"We are under no illusions," Obama said. "Passions run deep. Years of mistrust will not disappear overnight."

In earlier remarks after his meeting with Netanyahu, Obama assailed those responsible for the killings of four Israelis near the West Bank city of Hebron on Tuesday. The militant Hamas movement, which rejects Israel's right to exist and opposes peace talks, claimed responsibility.

On Wednesday, Israeli police reported still another attack, saying Palestinian militants wounded two Israelis driving in the West Bank. The car in which the wounded Israelis were riding was riddled with bullets.

Direct Israeli-Palestinian negotiations broke off almost two years ago, in December 2008, and the Obama administration spent its first 20 months in office coaxing the two sides back to the bargaining table. Obama was adamant Wednesday that extremist violence would not derail the process.

"There are going to be extremists and rejectionists who, rather than seeking peace, are going to be seeking destruction," he said. "The United States is going to be unwavering in its support of Israel's security. And we are going to push back against these kinds of terrorist attacks. And so the message should go out to Hamas and everyone else who is taking credit for these heinous crimes that this is not going to stop us."

Expectations for the Washington talks are low, yet the stakes are high. The Israeli-Palestinian conflict is a constant source of grievance and unrest among Muslims. The failure of past peace efforts has left both sides with rigid demands and public ambivalence about the value of a negotiated settlement.