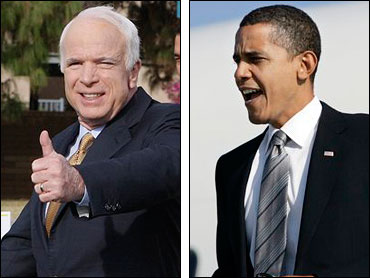 Democrat Barack Obama appeared close to victory in his historic bid to become the first black U.S. president Tuesday, while Republican John McCain hoped for an upset as Americans cast their votes in the grueling struggle for the White House.

Heading into Election Day, Obama continued to lead in the polls and both campaigns launched get-out-the-vote efforts expected to result in a record turnout.

Obama joined the nation's earliest voters, casting his ballot at Beulah Shoesmith Elementary School in Chicago shortly after 7:30 a.m. CST (13:30 GMT), with voters cheering him when he held up a validation slip.

"The journey ends, but voting with my daughters, that was a big deal," Obama told reporters later.

McCain, meanwhile, acknowledged it was an uphill fight, but said his longshot bid for the presidency was close to victory.

"Look, I know I'm still the underdog, I understand that," McCain told CBS' The Early Show. "You can't imagine, you can't imagine the excitement of an individual to be this close to the most important position in the world, and I'll enjoy it, enjoy it. I'll never forget it as long as I live."

McCain added: "This is a historic election, as we all know, and I think it's up for grabs, and we're going to work hard until the polls close."

Later, he returned to Phoenix and cast his vote. He was greeted by a small crowd cheering, "Go, John, go!"

But going into Tuesday's voting, Obama had a comfortable, nine-point advantage among likely voters, with a smaller percentage - just five percent - remaining undecided.

Late Tuesday morning, Obama flew to Indianapolis to surprise some voters with a round of last-minute phone calls. He arrived at Indianapolis International Airport around 10:30 a.m. and headed to a nearby United Auto Workers Local 550 "Get Out the Vote" call center. He stayed there about 45 minutes and made 13 phone calls.

Voters in Virginia, New York and other East Coast states lined up outside polling places hours before they opened at 6 a.m. (1100 GMT).

As Ahmed Bowling of Alexandria, Virginia, waited to vote in a crucial battleground state, he said the election "will mark a significant change in the lives of all Americans, and so we do have to come out as early as possible to cast our votes."

Virginia is one of eight key battleground states that could determine the winner of the election. The rest include Florida, North Carolina, Pennsylvania, Ohio, Indiana, Missouri and Nevada.

About 29 million people have already cast ballots over the past few weeks in 30 states that allow early voting.

Obama seemed to hold the edge in pre-election balloting, as officials reported that more Democrats than Republicans had voted in North Carolina, Colorado, Florida and Iowa. All four states voted for Bush in 2004.

Some Democratic Party experts said Obama has built a grass-roots organization that could drive a massive turnout and transform victory into a rout.

"We think we have enough votes around the country," Obama campaign manager David Plouffe told "Today" on NBC Tuesday.

Obama, however, on Monday warned his supporters to take nothing for granted, as the race depended on a relative handful of states that could go for either candidate.

Both the 47-year-old Obama, and McCain, a 72-year-old veteran senator from Arizona, pledged to bring sweeping change to Washington and close the door on the two-term presidency of Mr. Bush - whose approval ratings are near record lows.

But the two candidates were divided by age, race and core political convictions. They were deeply at odds over how to fix the U.S.'s crumbling economy and end the 5 1/2-year war in Iraq. Obama has argued that McCain offers little more than an extension of Bush's policies while the Republican counters that Obama is too inexperienced to lead.

While McCain said he would not be scared of an Obama victory, he told The Early Show he and his opponent have vastly different plans for the country's future.

"He really is on the far left part of the liberal philosophy in America," McCain said.

Democrats also sought to gain seats in both chambers of Congress, while Republicans battled to limit their losses. Many races were rated as tossups in the campaign's final hours.

The American presidential election amounts to separate contests in 50 states and Washington, D.C.

At stake are 538 electors, with the winning candidate needing to capture at least half plus one. Electors are apportioned to the states roughly according to population.

As Election Day dawned, Obama was favored to win all the states Democrats captured in 2004. That would give him 251 electoral votes.

Victories in a few swing states could give him 270 electoral votes and the presidency.

McCain, meanwhile, must hold as many Bush states as possible while trying to capture a Democratic stronghold, such as Pennsylvania in order to keep his hopes alive.

In the closing hours of Obama's campaign, he mourned the loss of his grandmother, Madelyn Payne Dunham, 86, who died of cancer in Hawaii late Sunday. Dunham raised Obama during much of his childhood, but she never got to see the results of the historic election.

The family said a private ceremony would be held later.

McCain's efforts Tuesday continued a frantic dash a day earlier through several traditionally Republican states where his chances were uncertain.

He stopped on Monday in Florida, Virginia, Indiana, New Mexico and Nevada. And he again passed through Pennsylvania, a state that voted Democratic in 2004 and where he trails by a wide margin in some polls.

The veteran Arizona senator sought to paint Obama a a political radical outside the American mainstream, while a Republican group repeatedly aired television ads attacking Obama for his association with a black preacher who has harshly criticized the U.S. in fiery sermons.

Despite the Republican offensive, Obama appeared to have the edge with voters seeking political change, taking the lead in the race as voter worries about the economy eclipsed the Iraq war.

He also has benefited from a record fundraising effort and capitalized on a U.S. demographic shift as more young and non-white voters enter the electorate.

"Tomorrow I hope, I pray, I believe I will be able to wake up as vice president elect and get to work in a transition mode with president elect John McCain," she said. "...We have an optimistic, confident view of what is going to happen today."

She declined to say whom she voted for. She planned to return to Phoenix Tuesday night for a Republican rally.

In Delaware, Democratic vice presidential candidate Joe Biden cast his vote and, later, joking warned his elderly mother, who had accompanied him: "Don't tell them who you voted for."