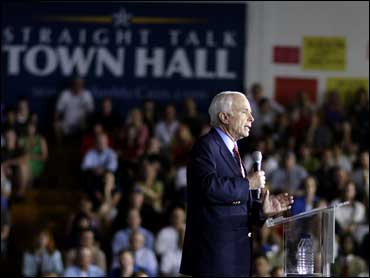 Obama campaign manager David Plouffe said he offered to meet McCain in five joint appearances between now and the Nov. 4 election. But only one of those was a town-hall meeting, plus three traditional debates and an in-depth debate on foreign policy.

The McCain campaign said Obama's offer was to hold the single town hall on Independence Day - which likely would have resulted in less attention while Americans are on holiday. McCain told reporters traveling with him in New Jersey that was "a very disappointing response."

McCain had said the more intimate town-hall format, a give-and-take between a candidate and the audience, would allow real interaction with voters and would be more revealing than formal televised debates. Town halls are also McCain's favorite style of campaigning and would allow him to get free media attention alongside the better-funded Obama.

When a McCain adviser first floated the idea last month, Obama said it was a great idea. But the Illinois senator told reporters Tuesday that it's not realistic to have 10 town halls with all the other campaigning he needs to do after just clinching the Democratic Party's nomination months after McCain wrapped up the GOP nod.

The two campaigns have been unable to work out a deal, other than to agree that the town halls should not be sponsored by media organizations and instead be open to all networks like presidential debates. The two sides on Sunday jointly rejected an offer by New York City Mayor Michael Bloomberg and ABC News to host the first town hall for that reason.

Plouffe tried to place the blame on McCain for refusing to agree, saying five joint appearances "would have been the most of any presidential campaign in the modern era, offering a broad range of formats and representing a historic commitment to openness and transparency."

"It's disappointing that Senator McCain and his campaign decided to decline this proposal. Apparently they would rather contrive a political issue than foster a genuine discussion about the future of our country," Plouffe said.

McCain responded during a brief news conference in Pemberton, N.J., where he traveled for his own town hall.