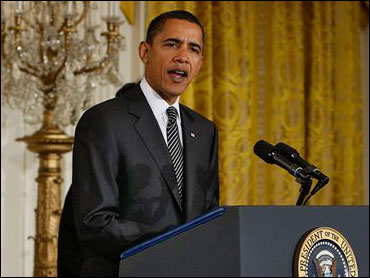 Saying the country "must have the courage and commitment to change," President Barack Obama took steps to redirect America's energy policy with a series of executive orders that continue the trend of reversing Bush administration policy.

Mr. Obama pushed for stronger curbs on greenhouse gases, saying he wants to make it easier for states such as California to adopt tougher fuel-efficiency rules than the federal standard.

And he also directed his administration to get moving on new fuel-efficiency guidelines for the auto industry in time to cover 2011 model-year cars.

Mr. Obama told a White House gathering that "America will not be held hostage to dwindling resources." He said the government must work with the states - not against them - on tougher fuel standards for cars and trucks.

"It will be the policy of my administration," he said, "to reverse our dependence on foreign oil while building a new energy economy that will create millions of jobs."

He said California and several other states have tried to come up with tougher emission standards but that "Washington stood in their way."

House Minority Leader Jim Boehner called the policy "disappointing," saying it will "destroy American jobs at the very time government leaders should be working together to protect and create them."

Shortly after the new policy was announce, General Motors Corp. said it would cut 2,000 jobs at plants in Michigan and Ohio, and it will halt production for several weeks at nine plants over the next six months due to slow sales.

Meanwhile, Secretary of State Hillary Rodham Clinton on Monday will appoint a special envoy for climate change as the Obama administration moves to restore America's credentials in environmental policy, U.S. officials familiar with the decision said.

Clinton will name Todd Stern, a former White House assistant who was the chief U.S. negotiator at the Kyoto Protocol talks in her husband's administration, to the post, the U.S. officials said. The officials spoke on condition of anonymity ahead of a planned midday State Department ceremony where Clinton will announce the appointment.

The attention on energy comes as Mr. Obama heads into his first full week as president, with an agenda dominated by economic woes and a push to get a huge stimulus plan through Congress.

On car emissions, California needed a waiver from the Clean Air Act to pursue its own course; the Bush administration's Environmental Protection Agency denied that permission, which affected at least 13 other states that have followed California's lead.

When California was denied the waiver back in 2007, it sparked outrage, with California Sen. Barbara Boxer, chairwoman of the Senate Environment and Public Works Committee, dubbing it an "outrageous decision" that ran "completely contrary to the law and science."

Last week, California Gov. Arnold Schwarzenegger, a Republican, sent a letter to Mr. Obama asking him to give California and other states permission to implement tough tailpipe-emission standards. Schwarzenegger said Mr. Obama "has a unique opportunity to both support the pioneering leadership of these states and move America toward global leadership on addressing climate change."

Mr. Obama will direct EPA regulators to re-examine California's case. The formal process will take time but is expected to end up in the states' favor. The Bush administration had rejected the request on grounds that a national fuel-efficiency strategy would work better.

"Reports of President Obama's decision to revisit the outrageous denial of the California waiver by the Bush Administration are more than welcome news," Sen. Barbara Boxer, D-Calif., said in a written statement released Sunday night. "When the waiver is signed, it will be a signal to Detroit that a huge market awaits them if they do the right thing and produce the cleanest, most efficient vehicles possible."

As a candidate for president, Mr. Obama pledged to overturn the EPA's denial.

"By beginning this process and directing EPA to review the Bush administration's lack of action, President Obama is turning the federal government into a force for positive change instead of a roadblock," said the Sierra Club's executive director, Carl Pope.

Mr. Obama is also expected to order new guidelines on fuel economy. The law requires that by 2020, new cars and trucks meet a standard of 35 miles per gallon, a 40 percent increase over the status quo. But the Bush administration did not set regulations in support of that law.

The president on Monday is also expected to tout proposals that he says would boost clean energy supplies while also producing badly needed jobs in so-called "green" industries.

The president's $825 billion economic stimulus package remains a priority this week, as Mr. Obama heads to Capitol Hill Tuesday to lobby Republican leaders for support on the plan.