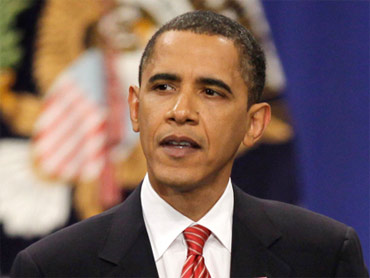 President Obama announced his new strategy in Afghanistan and Pakistan in a speech Tuesday night, vowing to deploy 30,000 additional troops to Afghanistan as quickly as possible and setting July 2011 as a date to begin pulling U.S. forces out of the country.

Under the new plan, the first new Marines will likely be in Afghanistan by Christmas.

"I do not make this decision lightly," the president said, telling more than 4,000 West Point Military Academy cadets that "as your Commander-in-Chief, I owe you a mission that is clearly defined, and worthy of your service."

CBS News chief Washington correspondent Bob Schieffer said Tuesday night that the speech will be looked back at as the "defining moment of the Obama presidency."

"This was the night when Barack Obama took full ownership of the war in Afghanistan," he said.

Mr. Obama said it is in America's "vital national interest" to add the additional 30,000 troops to the war effort. Their deployment will mean the United States will have more than 100,000 troops in Afghanistan.

He said most will deploy early next year, moving at "the fastest pace possible," with a mission to "target the insurgency and secure key population centers."

"They will increase our ability to train competent Afghan Security Forces, and to partner with them so that more Afghans can get into the fight," he said. "And they will help create the conditions for the United States to transfer responsibility to the Afghans."

The president also said that U.S. troops will begin to come home in approximately 18 months, though he did not set a date for a full withdrawal of American forces. The troop surge, he said, will "allow us to begin the transfer of our forces out of Afghanistan in July of 2011."

"Just as we have done in Iraq, we will execute this transition responsibly, taking into account conditions on the ground," the president told cadets, who applauded intermittently throughout the speech and offered a standing ovation at its conclusion.

The president made the war his with the speech, argues CBS News chief political consultant Marc Ambinder -- and in doing so risked making the biggest political blunder of his presidency.

"He did so knowingly, deliberately, and without blinders on," writes Ambinder.

Among those in the audience for the address were Secretary of State Hillary Clinton, Secretary of Defense Robert Gates, U.S. Central Command Chief General David Petraeus and Chairman of Joint Chiefs of Staff Admiral Mike Mullen.

In the highly-anticiated address, the president said that while gains had been made in Afghanistan since he came into office, the country has "moved backwards" for several years, in part because the United States has been focused on Iraq.

"There is no imminent threat of the government being overthrown, but the Taliban has gained momentum," he said. "Al Qaeda has not reemerged in Afghanistan in the same numbers as before 9/11, but they retain their safe-havens along the border. And our forces lack the full support they need to effectively train and partner with Afghan Security Forces and better secure the population."

"The status quo," he said, "is not sustainable."

Watch CBS News Videos Online
The president said the three core elements to the new strategy are "a military effort to create the conditions for a transition; a civilian surge that reinforces positive action; and an effective partnership with Pakistan."

The overarching goal, he said, remained to "disrupt, dismantle, and defeat al Qaeda in Afghanistan and Pakistan, and to prevent its capacity to threaten America and our allies in the future."

Mr. Obama also addressed critics, among them former Vice President Dick Cheney, who have suggested his months-long review of the situation has amounted to "dithering" that has hurt the war effort and the country.

"Let me be clear: there has never been an option before me that called for troop deployments before 2010, so there has been no delay or denial of resources necessary for the conduct of the war," he said. "Instead, the review has allowed me ask the hard questions, and to explore all of the different options along with my national security team, our military and civilian leadership in Afghanistan, and with our key partners."

The president said he made his decision to deploy additional troops "because I am convinced that our security is at stake in Afghanistan and Pakistan."

"This is the epicenter of the violent extremism practiced by al Qaeda," he said. "It is from here that we were attacked on 9/11, and it is from here that new attacks are being plotted as I speak. This is no idle danger; no hypothetical threat."

The military effort, the president said, "will break the Taliban's momentum and increase Afghanistan's capacity over the next 18 months." He also noted that he is looking to American allies to further assist in the cause.

"Some have already provided additional troops, and we are confident that there will be further contributions in the days and weeks ahead," he said. The president argued that "the common security of the world" is at stake in the conflict.

He stressed, however, that the responsibility for Afghanistan did not lie with the United States or those allies, saying the Afghan government and people "will ultimately be responsible for their own country." The government of Afghan president Hamid Karzai has been harshly criticized for corruption.

"The days of providing a blank check are over," he said, adding that "we expect those who are ineffective or corrupt to be held accountable."

The president then addressed the Afghan people directly, telling them "America seeks an end to this era of war and suffering."

"We have no interest in occupying your country," he said.

"We will seek a partnership with Afghanistan grounded in mutual respect - to isolate those who destroy; to strengthen those who build; to hasten the day when our troops will leave; and to forge a lasting friendship in which America is your partner, and never your patron," the president said.

He also turned his attention to Pakistan, which he said was "inextricably linked" to U.S. efforts in Afghanistan.

"In the past, we too often defined our relationship with Pakistan narrowly," said Mr. Obama. "Those days are over. Moving forward, we are committed to a partnership with Pakistan that is built on a foundation of mutual interests, mutual respect, and mutual trust."

The president addressed what he called the "prominent arguments" against his strategy, including those grounded in the claim that Afghanistan is another Vietnam.

Watch CBS News Videos Online
"I believe this argument depends upon a false reading of history," he said. Unlike in Vietnam, the president argued, America now has the backing of other countries, is not facing a broad popular insurgency, and is fighting an enemy that attacked first.

"To abandon this area now - and to rely only on efforts against al Qaeda from a distance - would significantly hamper our ability to keep the pressure on al Qaeda, and create an unacceptable risk of additional attacks on our homeland and our allies," he said.

The president also responded to those who oppose a timetable for withdrawal and seek what he called "a more dramatic and open-ended escalation of our war effort - one that would commit us to a nation building project of up to a decade."

"I reject this course because it sets goals that are beyond what we can achieve at a reasonable cost, and what we need to achieve to secure our interests," he said. "Furthermore, the absence of a timeframe for transition would deny us any sense of urgency in working with the Afghan government."

"America has no interest in fighting an endless war in Afghanistan," added Mr. Obama.

"Success is what dictates dates for withdrawal and if we don't have that success and we only set an arbitrary date, it emboldens our enemies and disspirits our friends," McCain said.

The president also tried to address concerns, many from within his own party, about the cost of the war, saying it is something "we simply cannot afford to ignore."

"Our new approach in Afghanistan is likely to cost us roughly $30 billion dollars for the military this year, and I will work closely with Congress to address these costs as we work to bring down our deficit," he said.

Democratic Rep. David Obey, the chair of the House Appropriations Committee, told Couric after the speech that the war must be paid for.

"The fact is we've been told all throughout the health care debate that we must pay for every dollar of that bill," Obey said. "Well if that's the case they why should we not also pay for this effort? This effort is not just going to cost $30 billion on top of what we're already spending in Afghanistan - it's going to cost over $90 billion in a year."

After laying out his argument, the president closed by stressing that the fight "will not be easy." He cast it as "an enduring test of our free society, and our leadership in the world."

"It is easy to forget that when this war began, we were united - bound together by the fresh memory of a horrific attack, and by the determination to defend our homeland and the values we hold dear," said Mr. Obama. "I refuse to accept the notion that we cannot summon that unity again. I believe with every fiber of my being that we - as Americans - can still come together behind a common purpose."