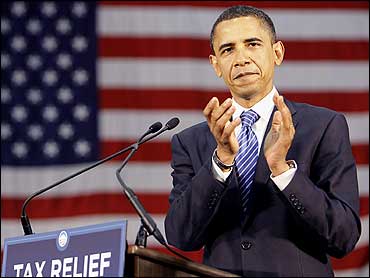 Democrat Barack Obama's campaign said Thursday that Michelle Obama never used the word "whitey" in a speech from the church pulpit as it launched a Web site to debunk rumors about him and his wife.

The rumor that Michelle Obama railed against "whitey" in a diatribe at Chicago's Trinity United Church of Christ has circulated on conservative Republican blogs for weeks and was repeated by radio talk show host Rush Limbaugh. The rumor included claims of a videotape of the speech that would be used to bring down Obama's candidacy this fall.

"No such tape exists," the campaign responds on the site, www.fightthesmears.com. "Michelle Obama has not spoken from the pulpit at Trinity and has not used that word."

The site is a response to the realities of a brave new world, where information travels 24 hours a day on blogs and voters are increasingly turning to the Internet for information. It's a particular problem for Obama, a relative newcomer to national politics who is still unknown to many voters and has been the target of persistent misinformation campaigns online.

In another sign of the campaign moving into the general election race, the Democratic National Committee's spokeswoman said Thursday its political and field operations are relocating to Chicago, where Obama's campaign is based. While other departments will remain in Washington, it's an effort to streamline the campaign and party efforts in one strategy instead of the overlapping efforts of past presidential elections.

E-mails about Obama rank No. 2 on the list of "Hottest Urban Legends" on snopes.com, an Internet rumor-debunking site, behind e-mail greeting cards that could expose computers to viruses.

Michelle Obama has often been the target of conservative attacks, prompting Obama to demand his rivals "lay off my wife." Much of the criticism came from her comment that her husband's campaign has made her proud of her country "for the first time," a remark that inspired a Tennessee Republican Party Web video questioning her patriotism.

There also have been more insulting attacks, and not just limited to the Internet. The Fox News Channel recently labeled her "Obama's baby mama," slang for a woman who has a baby without a romantic relationship or marriage. Fox also raised the inflammatory suggestion that she gave her husband a "terrorist fist jab" when they bumped knuckles the night he clinched the nomination.

The Obamas recently resigned from Trinity, where the Rev. Jeremiah Wright was the longtime pastor. Wright came under fire for sermons in which he cursed America and accused the government of conspiring against blacks. Video of the sermons spread quickly on the Internet and threatened great damage to Obama's campaign.

Other false claims about the Illinois senator - that he's secretly a Muslim who refuses to say the Pledge of Allegiance and is intent on destroying America - spread widely during the primary campaign, and Obama made it a habit of telling audiences to respond to e-mail rumors to set the record straight.

Barack Obama bristled when he was asked about the "whitey" rumor on his campaign plane last week, saying it was nonsense that shouldn't be repeated in questioning by a mainstream reporter.

"It is a destructive aspect of our politics right now," Obama told his traveling press corps. "And simply because something appears in an e-mail, that should lend it no more credence than if you heard it on the corner. And you know, presumably the job of the press is to not go around and spread scurrilous rumors like this until there's actually anything, one iota of substance or evidence that would substantiate it."

At the same time, his campaign was preparing the debunking Web site in a recognition that refusing to address rumors only perpetuates them.

The site explains that Obama is "a committed Christian" who never attended a radical madrassa during his childhood in Indonesia. With chain e-mails falsely claiming Obama was sworn into the Senate on the Quran, the holy book of Islam, the Web site includes a photo of him taking his oath of office on the family bible.

It shows C-SPAN video of Obama leading the Pledge of Allegiance with his hand over his heart as he presided over the Senate on June 21, 2007. It encourages people to send e-mail to friends and "spread the truth."

"The Obama campaign isn't going to let dishonest smears spread across the Internet unanswered," said spokesman Tommy Vietor. "It's not enough to just know the truth, we have to be proactive and fight back."