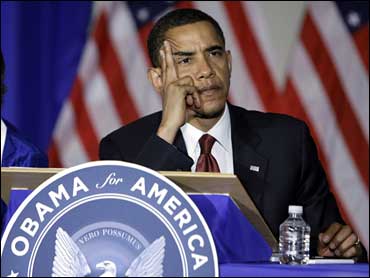 Barack Obama said Friday that presidential rival John McCain's proposal to allow offshore drilling "makes absolutely no sense at all" as he headed to Florida to put the Republican on the spot over the issue.

Obama said opening up the U.S. coastline to oil exploration would not give Americans any appreciable savings until 2030.

"Even then you're looking at cents on a gallon of gas," Obama told Democratic governors at a meeting in his hometown. "Who knows 22 years from now, what would gas be at the pace that we're going right now?"

Instead, Obama said he would invest $150 billion over the next 10 years to create green jobs, particularly in the automotive industry and to improve the electricity grid so people can drive plug-in hybrid vehicles.

Obama planned a news conference after his arrival in Jacksonville, Florida, later in the day to criticize McCain on changing his position on drilling offshore. In McCain's 2000 campaign, he said he favored the federal government's 27-year moratorium on offshore drilling. This week, he said he supports lifting it to give states the option to drill.

Obama told the governors he couldn't wait to hear what their Republican colleague Arnold Schwarzenegger of California would have to say about McCain's plan. Told that he'd already spoken out, Obama said, "He's thumbs down, right?"

He is. Schwarzenegger said Wednesday that California's coastline is "an international treasure" that must be protected.

Obama discussed the economy with the 16 Democratic governors. They told him how people in their states are suffering, from high energy and food costs, loss of manufacturing jobs and the housing slump.

"There is a deep recession and frankly I believe it's gaining momentum," said New Jersey Gov. Jon Corzine, who backed Obama's primary rival Hillary Rodham Clinton. "I don't think we're half way through."

Obama said he would work with them on policies that would help, including a plan to spend billions in taxpayer dollars to build roads, bridges and other infrastructure projects that could create jobs and improve transportation routes. Obama asked if they have projects that were ready to go if they had the money, and there were nods and calls of "Absolutely!" around the table.

"Within three months, you could start putting people back to work," he said.

West Virginia Gov. Joe Manchin responded, "I think we could put a lot of people back to work in one month. We're ready."