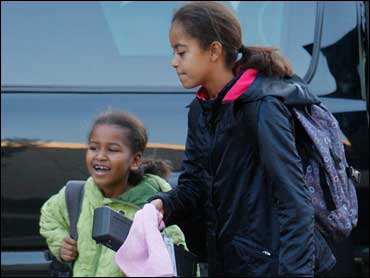 President-elect Barack Obama and his wife have chosen Sidwell Friends School for their two daughters, opting for a private institution that another White House child, Chelsea Clinton, attended a decade ago.

"A number of great schools were considered. In the end, the Obamas selected the school that was the best fit for what their daughters need right now," said Katie McCormick Lelyveld, a spokeswoman for Michelle Obama.

She said Malia, 10, and Sasha, 7, "bring with them a number of security and privacy concerns that come with being part of the new first family — and the school they've selected is positioned to appropriately accommodate that."

She also said that Sasha and Malia had become good friends with Vice President-elect Joe Biden's grandchildren, who attend the school.

Sidwell is a private Quaker school with a campus in northwest Washington for grades 5-12 and another in suburban Bethesda, Md., for kindergarten through fourth grade. Malia is in fifth grade and Sasha is in second grade, suggesting that the girls would attend schools at different locations.

Michelle Obama and her daughters visited Sidwell and another elite private school, Georgetown Day, earlier this week. The soon-to-be first lady visited both schools last week, without her daughters.

Lelyveld said that while public schools were considered, the Obamas felt that a private school was in the best interest of their children. The two girls currently attend a private school in Chicago.

"Mrs. Obama is the product of public education on the South Side of Chicago and she believes strongly in the importance of good public schools for all kids," Lelyveld said. "The Obama administration intends to work closely with the school systems in the years to come to ensure quality public education is available to all kids."

Malia and Sasha Obama currently attend the private University of Chicago Laboratory Schools, where Michelle Obama is on the board.